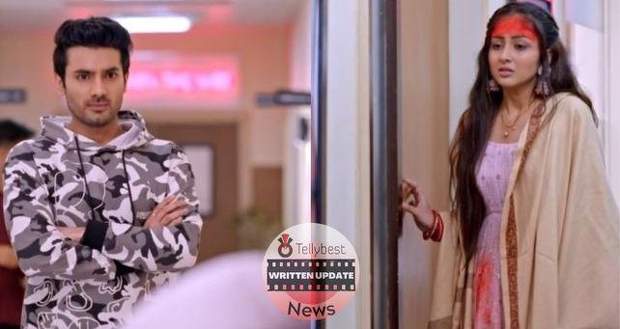 Today's Parineeti 3rd October 2022 episode starts with Parineet taking care of Neeti in the hospital while hiding her true feelings of despair and sorrow from Neeti.

Parineet thinks about Neeti living as Rajeev’s legal wife and feels how that will affect their friendship in many ways.

Neeti notices Parineet’s gloomy face and asks her if she is thinking about Rajeev who betrayed her for another girl.

Sarcastically, Neeti is the one who says that she will teach Rajeev and that other girl a lesson without even having the slightest idea that it is her.

Parineet asks Neeti what they should do if they get to know that the other girl is also unaware of the scam done by Rajeev.

Neeti replies that the two girls are in the same situation and getting played by Rajeev simultaneously.

Meanwhile, Rajeev calls Gurinder on his way to Neeti’s room with sweets to congratulate her for being his child’s mother.

Gurinder tells Rajeev that she cannot let go of the land that Parineet’s family gave Rajeev so he has to ensure Parineet does not go back.

Rajeev asks Gurinder to let go of the land and focus on becoming a grandmother soon as Neeti is pregnant.

Gurinder scoffs at the news and tells Rajeev that the child will stir up more problems in the future.

On the other hand, Parineet informs Neeti that she has talked with Sanju’s parents and they are ready to accept her as their daughter-in-law.

Neeti gets very happy and shares a warm hug with Parineet while thanking her.

Rajeev enters the room with sweets but gets silent after seeing Parineet present there with Neeti.

As Rajeev proceeds to feed sweets to Neeti for her pregnancy news, Neeti says that Parineet deserves the first bite and asks Rajeev to feed her.

Neeti makes fun of Parineet and Rajeev as they freeze around each other and say that they act like a married couple.

Parineet comes out of the room and begins to cry in Chandrika’s arms.

After Parineet calms down a bit, Chandrika asks her to pass the “agnipariksha” that is awaiting ahead of her.

Neeti expresses her happiness in getting accepted by Sanju’s family as their child will get everybody’s love.

Rajeev and Neeti act lovey-dovey when Amit comes and informs them that they can proceed home.

Rajeev mistakenly asks Amit if Pari is going back with them which surprises Neeti as she asks why Pari would go to his house.

© Copyright tellybest.com, 2022, 2023. All Rights Reserved. Unauthorized use and/or duplication of any material from tellybest.com without written permission is strictly prohibited.
Cached Saved on: Monday 21st of November 2022 03:26:40 AMCached Disp on: Thursday 1st of December 2022 01:02:23 PM