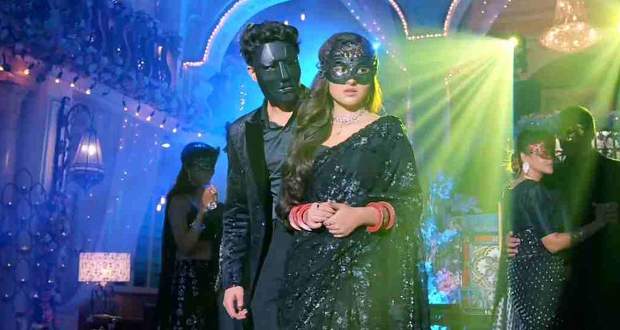 Natasha forces Pari to drink whiskey and Pari gets drunk and starts recalling Rajeev and her romantic moments while a soft song plays in the background.

However, Pari sees Rajeev aka Sanju and gets excited and starts to go towards him but gets dizzy while Neeti supports her.

Sanju hides but Pari starts finding him thinking he's playing hide and seek with her.

Neeti tries to follow drunk Pari but Natasha stops Neeti and takes Neeti with her.

However, Sanju runs away after pushing a waiter into Pari.

Meanwhile, Monty with her date is present at the same hotel where Naman's Sangeet was held.

Ecstatic Monty crashes into Seema and accidentally gets their room key exchanged.

Meanwhile, Ajay tells Shreya about Sanju being married to both Neeti and Pari.

Ajay recalls his conversation with Sanju about Pari not knowing that Sanju is her Rajeev as he hasn't met Pari as Sanju ever.

However, Sanju explains to clear Ajay's confusion that Pari and Rajeev got married in the village due to his mother's greed for land but Sanju loved Neeti but Neeti refused his proposal.

Meanwhile, Sanju finds out Neeti and Pari are best friends and how they are both present in this function together.

At the same time, Seema takes the room's key from Naman while Neeti finds Sanju standing with Naman.

Meanwhile, Neeti apologizes to Sanju and blames Pari for her suspicions and tells Sanju to ask anything in return for forgiveness.

However, Sanju asks for a kiss while Neeti gives him a cheek kiss blushing while Sanju returns the cheek kiss to Neeti lovingly.

Meanwhile in Pari's mind, Pari accuses Sanju of cheating on Neeti due to him changing his clothes multiple times in the same evening.

However, Sanju and Neeti continue their romantic banter as Pari sees from afar.

Meanwhile, Sanju gets more romantic and starts to close the distance between him and Neeti's lips but shy Neeti puts his mask on to refrain Sanju from kissing her in public.

However, Neeti tries to run away from Sanju with flushed cheeks but Sanju grabs her from behind.

Meanwhile, Sanju gets shocked seeing Pari watching him and Neeti.

© Copyright tellybest.com, 2022, 2023. All Rights Reserved. Unauthorized use and/or duplication of any material from tellybest.com without written permission is strictly prohibited.
Cached Saved on: Monday 21st of November 2022 08:55:04 AMCached Disp on: Thursday 1st of December 2022 11:19:01 PM