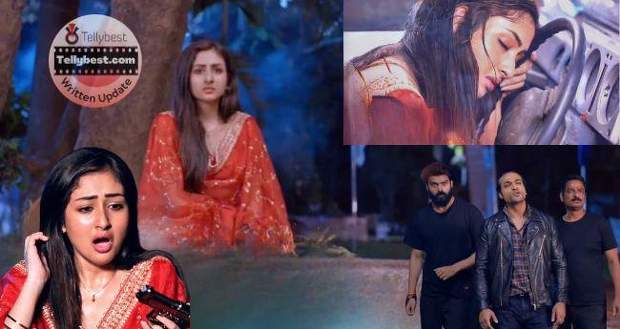 Today's Parineeti 4th January 2023 episode starts with Monty getting a call from Babli who asks him if he has found Pari as Rakesh can do anything to Pari.

When Monty informs Babli that they are still searching for Rajeev and Pari, Babli yells at him for not finding her sister which irritates Monty so he cuts the call.

Once Monty cuts the call, Neeti scolds him for behaving rudely with Babli and Monty tells her that he knows Babli is tense but she is making him stressed by calling continuously.

Neeti then orders Monty to turn the car to Rakesh’s home direction and Monty reluctantly agrees.

Meanwhile, in Bajwa’s house, Gurinder overhears Babli telling herself how Rajeev has never been a good husband, and now he cannot rescue Pari from Rakesh’s grip.

On the other hand, Pari gets happy to see a chemist’s shop but her happiness vanishes as she realizes the shop is closed and starts wandering on the road.

Just then a police van stops in front of Pari and the police officer helps Pari by giving her a ride after Pari tells him about her search for a doctor.

Hearing this, Pari gets happy and hops into the car without thinking.

During the ride, the officer tells Pari how she is lucky to meet him as this area is hazardous and further asks Pari how she got stuck in this situation.

In reply, Pari narrates how Rakesh abducted her and how some goons are after her and her husband while the police officer listens quietly.

When the light falls on the police officer’s face, it is revealed that it is the same police officer who even asks Pari why she messed with Mr. Ahlawat which surprises Pari.

Back in present, Pari requests the officer to let her go but the police officer speeds up his car which terrifies Pari.

Pari gets into an accident

Finding Leo and his goon at the end of the road scared Pari pushes the officer out of the car and takes control of the car.

However, the car suddenly stops as Pari goes numb for a few minutes, and Leo along with the goon starts beating the car but Pari restarts the car to drive away.

While Pari drives toward the main road with shaky hands, Leo and his goon start following her.

Meanwhile, Pari calls Monty to inform him about Rajeev's location but before Monty can say anything further, Pari cuts the call and feels sorry for herself as she thinks she will die now.

At the same time, Leo tries to grab Pari by her arms from his car but Pari speeds up her car, and a truck to coming towards them at high speed.

Leo's car moves away from the truck's root whereas Pari hits the car with a pole and falls unconscious.

On the other hand, Neeti and Monty finally arrive at the old man's hut and Rajeev gets surprised to see Neeti whereas Neeti feels calm.

While Rajeev and Neeti hug each other emotionally, the Naina song plays in the background.

Afterward, Neeti questions Rajeev about Pari to which Rajeev replies that Pari has gone to bring a doctor for him but Monty reveals that Pari is the one who informed them about Rajeev's situation.

Meanwhile, looking at Pari's unconscious body, Leo orders his goon to take Pari with them as he wants to see the fear in Pari's eyes when he kills her.

Later, Neeti, Monty, and Rajeev decide to search for Pari as they think Pari is in trouble and the old man gets shocked when Neeti introduces herself as Rajeev's wife.

© Copyright tellybest.com, 2022, 2023. All Rights Reserved. Unauthorized use and/or duplication of any material from tellybest.com without written permission is strictly prohibited.
Cached Saved on: Wednesday 25th of January 2023 11:12:32 AMCached Disp on: Monday 6th of February 2023 05:37:32 AM