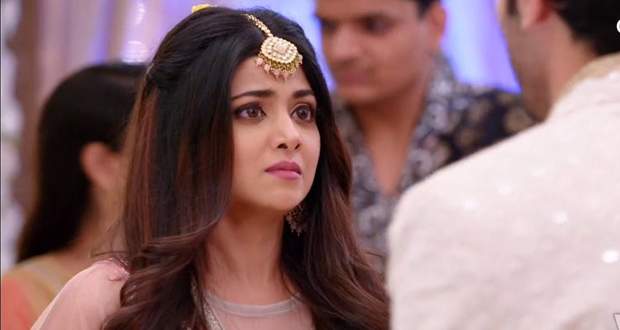 Today's Parineeti 4th May 2022 episode starts with Gurpreet getting tensed about her daughter Parineet and getting intuitive about her.

Meanwhile, Vikram says the groom's picture should not be displayed as it is destroyed and is considered a bad omen.

Later, Neeti's friend flirts with Vicky while Neeti says she should not keep an eye on him.

As Shreya (Neeti's friend) asks for Vikram's hand in marriage, Neeti suggests nothing can be forced and will be paired with only one God has decided for them.

Meanwhile, Vikram gets emotional and gets teary-eyed as he cannot marry the love of his life.

Later, Neeti holds Vikram's hand and moves toward Sanju's room to introduce him to her fiance.

Vikram walks away as he receives an important call about receiving a job and fails to see Sanju's face.

Meanwhile, Sanju romantically writes out vows for his engagement and presents the paper to Neeti.

Neeti gushes with love and the couple glance at each other.

Meanwhile, Parineet calls Vikram and informs him about Rajeev's irresponsible behavior of leaving her at the mall and asks for Rajeev's number.

Later, Shreya arrives with the flower garlands to get beautiful engagement shots for Sanju and Neeti's big day.

On the other hand, Parineet calls Rajeev but he declines and leaves her crying in a serious situation.

Rajeev and Neeti lovingly put garlands around each other's necks while Parineet gets handcuffed by the police.

Meanwhile, the happy couple gets their photographs together but Vikram gets clicked in between them.

As Parineet gets arrested, she requests the salesgirl to inform her husband whenever he will arrive at the mall about her.

Later, Neeti requests Sanju to stay as it is and never change at any cost.

On hearing this Sanju starts to get worried about his truth being caught while Neeti's friends request them to arrive soon as they have been waiting forever.

On the other hand, Pari gets arrested and feels humiliated while walking toward the police jeep.