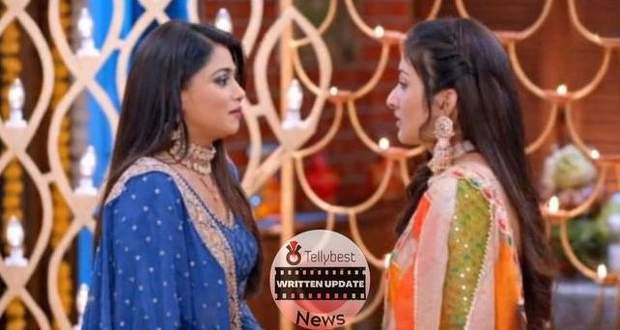 Pari however quickly adds that Neeti has come here to celebrate Diwali with them and Gurpreet nods.

Gurpreet then questions Pari about Rajeev’s whereabouts and Gurinder adds that Rajeev is busy with some work.

Gurpreet also orders Pari to make tea for her and Pari urges Gurpreet to come to the kitchen with her so they can catch up.

Meanwhile, in the kitchen, Gurpreet starts praising Rajeev while tears roll down her cheeks.

Looking at Gurpreet, Pari wishes to hug her and reveal Rajeev’s truth but she controls herself.

Gurpreet further suggests Pari get pregnant as the baby will bring Pari and Rajeev even close while Pari looks uncomfortable.

On the other hand, Neeti happily informs Rajeev about Gurpreet’s arrival and urges Rajeev to meet Gurpreet.

To distract Neeti, Rajeev closes the distance between him and Neeti and urges Neeti to give him a kiss in a low voice.

Neeti tells Rajeev that she does not understand Rajeev’s mood while Rajeev thinks he is doing this to keep Neeti inside the room.

Meanwhile, Gurpreet gets an important call and walks away from the kitchen to take it despite Pari’s protest.

While walking, Gurpreet hears Rajeev’s voice and decides to follow it.

However, before Gurpreet can open the door, Pari arrives there at the same time and takes Gurpreet away.

Neeti comes out of the room after Pari takes Gurpreet away and Rajeev calls Monty for help.

Rajeev informs Monty about Pari’s mom’s arrival in a stammering voice and requests Monty to give him an idea so he can meet Pari’s mom without Neeti knowing.

Hearing this, Monty calms Rajeev down and tells Rajeev that he has a plan to keep Neeti busy so Rajeev should wait for his signal.

Later, Monty urges everyone to give him a blessing so he can host next year’s Diwali party with his wife.

Simmy however questions Monty if he wants Neeti or Pari’s characteristics in his wife but before Monty can answer, Gurpreet announces that they should look for someone who has both Neeti and Pari qualities.

Monty then calls Neeti for the dance while Gurpreet feels confused as she thinks Pari should dance first.

Pari lies to Gurpreet that Monty does not want Neeti to feel alone when Gurpreet questions Pari about Neeti’s dance.

During Neeti's dance, Rajeev quickly arrives there to take Gurpreet's blessing and Gurpreet gives him and Pari shagun.

However, Neeti notices this and gets confused and she runs after Rajeev as soon as her performance ends.

Meanwhile, Monty urges Parminder and Tayaji to dance and Gurpreet thinks she should talk to Monty about giving Neeti the first chance to dance.

Later, Neeti questions Rajeev why Gurpreet was giving him and Pari shagun while color drains from Rajeev's face.

© Copyright tellybest.com, 2022, 2023. All Rights Reserved. Unauthorized use and/or duplication of any material from tellybest.com without written permission is strictly prohibited.
Cached Saved on: Monday 21st of November 2022 01:05:11 AMCached Disp on: Tuesday 29th of November 2022 12:01:31 AM