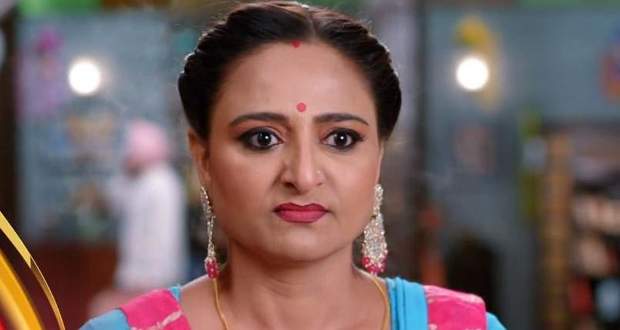 Today's Parineeti 5th April 2022 episode starts with Rajeev and Parineet getting ready to visit Kakkar's house while Rajeev asks for a towel that he forgot in the room.

As soon as Parineet gives Rajeev the towel, he accidentally pushes Pari towards him making Parineet shower with Rajeev.

Later, Parineet apologizes for slipping toward him while Rajeev says she should not be embarrassed by it.

After the couple comes out of the shower, Parineet asks Rajeev to put vermillion on her forehead as it will make her happy.

Later, Rajeev adds vermillion on Parineet's forehead but feels irritated after she leaves. Rajeev feels annoyed by the unnecessary drama and wants to leave Parineet at her house as soon as possible.

Meanwhile, Parineet and Rajeev sit in the car where Rajeev suggests Parineet fasten her seatbelt as he wants Parineet to be safe.

Later Pari wants to express her feelings in front of Rajeev that she had a crush on Rajeev the first day she saw her, but feels shy and diverts the conversation toward carrot pudding.

As soon as Pari is about to share her best friend Neeti's name with Rajeev, a motorcyclist comes in their way while Rajeev saves Parineet from bumping on the dashboard.

Rajeev says he will send Pari safely to her house and thinks of getting his independence back.

Later, Parineet and Rajeev reach the Kakkar house, where Gurpreet welcomes the couple.

After some time, Rajeev asks Gurpreet the way towards the washroom, while Parineet guides Rajeev towards her room to help him freshen up for lunch.

Meanwhile, Pari asks Rajeev why his behavior changes when he is alone with her as Rajeev is talkative in general and shy with Pari.

Pari makes a move to know more about Rajeev while Rajeev stays formal with her.

Meanwhile, Rajeev walks to put the towel near the washbasin while he slips on the bed with Pari.

Later, Neeti and Pari's photograph falls to the ground with a light wave of wind but Rajeev couldn't see Neeti's face.

On the other hand, Mandeep is furious at seeing Rajeev's face again and calls him greedy while Gurpreet doesn't hear her and advises Mandeep to behave in front of their son-in-law.