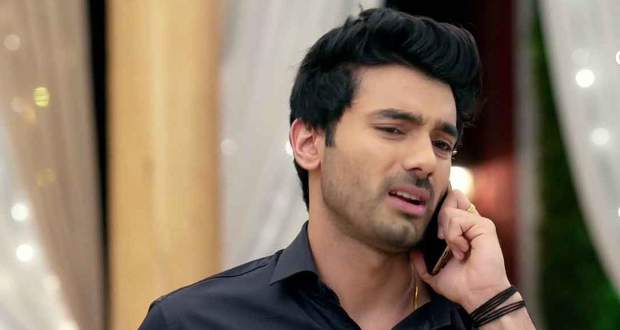 Today's Parineeti 5th August 2022 episode starts with Sanju getting shocked seeing Pari while making an excuse to Neeti and goes from there hurriedly.

Meanwhile, Naman finds Harsh talking to someone about going into room 303.

However, suspicious of Harsh action, Naman decides to follow him.

Hearing the situation from Naman, Sanju accuses Harsh of having an affair.

Meanwhile, Monty gets a call from Sanju to reach Naman's Sangeet fast while Monty tells him he's in room no. 303 waiting for his date.

However, Sanju cracks the situation and runs to room no. 303.

Meanwhile, Seema sees Monty in her room and gets shocked.

Naman gets shocked to see Harsh having an extramarital affair with a girl of his daughter's age.

Sanju stops Naman while misunderstanding that Monty is in the room with Harsh.

Meanwhile, Monty comes with Seema aunty and finds Naman and Sanju standing together.

Seeing Harsh in the room with Monty's date Seema gets shocked and misunderstands Harsh of cheating and goes from there.

However, Monty's date is a fake health insurance agent while Harsh falls into her trap and comes to renew his insurance.

Sanju goes with the agent into the room to give her the fraud money.

Meanwhile, Pari sees Sanju with a mask and accuses him of cheating on Neeti first with Shreya and now with this girl.

At the same time, Harsh dances romantically to pacify Seema while everyone starts to dance to medley songs.

Meanwhile, Neeti pities Pari for being alone at the party while Sanju comes and starts dancing with Neeti.

At the same time, Pari recalls Rajeev and imagines dancing with Rajeev.

Meanwhile, Sanju goes to the bar to have a drink and notices the chandelier swirling while Neeti is dancing.

Panicked Sanju screams her name but Neeti doesn't hear him.

Meanwhile, the chandelier starts to fall with a crashing force while Sanju saves Neeti by grabbing her on time and pulling her out of Chandelier's location.

Everyone gathers near Sanju and Neeti while Harsh orders the waiter to bring water.

Seeing all the commotion Pari comes to see and hears a woman talking about Sanju getting crushed under the chandelier.

At the same time, Sanju sprinkles water on Neeti and screams to call for a doctor.

Seeing Neeti awake Sanju holds her delicately and asks her if she's okay and kisses her forehead.

© Copyright tellybest.com, 2022, 2023. All Rights Reserved. Unauthorized use and/or duplication of any material from tellybest.com without written permission is strictly prohibited.
Cached Saved on: Thursday 26th of January 2023 08:06:16 PMCached Disp on: Sunday 5th of February 2023 12:13:09 PM