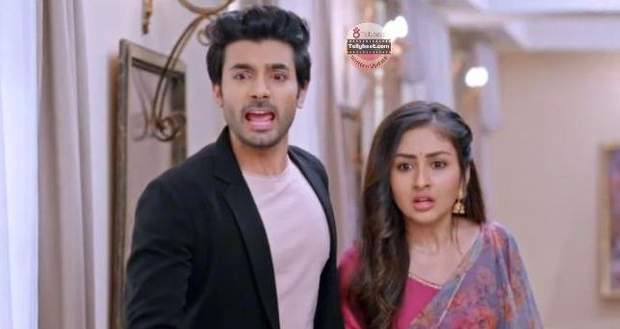 Today's Parineeti 5th December 2022 episode starts with Pari saying that she will leave Chandigarh soon as her staying there will continue to cause problems between Rajeev and Neeti.

Rajeev asks Pari why she will leave, to which Pari replies that she is responsible for Neeti’s condition and always comes in between them.

Rajeev says that it is none of their fault that Neeti ended up in such a condition and confesses that he cannot live with Neeti.

Pari replies that she understands how it feels to lose their loved ones and assures Rajeev that she will move away from his and Neeti’s relationship.

Pari leaves for home while Rajeev feels bad for her seeing the blame going on her.

Meanwhile, at home, Biji says why no one has called the hospital and known about the news regarding Neeti.

Just then, Pari enters and informs everyone that she has come to take Neeti’s clothes from home.

Biji asks where Rajeev is to which Pari answers that he is at the hospital with Neeti.

Making a sour face, Biji tells Pari that she should not leave Rajeev alone with Neeti as they cling to each other a bit too much.

Pari tries to make Biji believe that there is nothing like that but Biji says that she has seen Rajeev and Neeti being intimate with each other.

After Pari leaves, Biji asks Gurinder to take care of Pari as she is the one who will serve her when she gets older.

However, Gurinder tells herself that Neeti is the one who is going to give her what she wants.

Before Pari leaves, Babli tries to make Pari understand that Neeti is the one coming in between her and Rajeev.

As Pari reaches the hospital, she spots Neeti leaving while Rajeev follows her to stop her.

Pari asks Neeti why she is leaving in such a hurry and tries to explain to her that nothing is there between her and Sanju.

Neeti says that once suspicion builds its nest in one’s heart, it does not go away.

Neeti refuses to hear anything more and calls Gurinder to the hospital who says extremely nasty things to Pari.

Gurinder says that Pari is eating up her friend’s life after gobbling up her father which passes Rajeev’s limit and he asks her to stop.

Just then, Sukhwinder comes and says that everyone except Pari can hurt Neeti in any way.

Gurinder tells the entire matter to Sukhwinder which shocks her to the core.

© Copyright tellybest.com, 2022, 2023. All Rights Reserved. Unauthorized use and/or duplication of any material from tellybest.com without written permission is strictly prohibited.
Cached Saved on: Wednesday 25th of January 2023 01:19:11 PMCached Disp on: Thursday 2nd of February 2023 08:41:33 PM