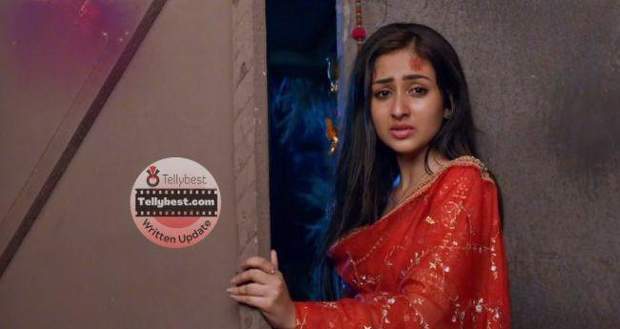 Today's Parineeti 5th January 2023 episode starts with Neeti introducing herself as Rajeev’s wife to the old man who gets shocked.

While the old man stares at Rajeev, Rajeev bids his farewell to the old man and drives away.

Meanwhile, Pari is begging continuously Leo to let her go as soon as she opens her eyes in the car.

When Pari is looking around for the phone, Leo asks her if she is looking for her phone and he starts laughing like a manic seeing Pari’s desperation.

The car suddenly stops on a lonely street and Leo drags Pari out of the car forcefully ignoring Pari’s pleading.

Looking at Pari with lustful eyes, Leo compliments her for her beauty since he has also developed a liking for her.

Leo spreads his hand to touch Pari’s collarbone which makes Pari flinch but Leo tells her that he will not kill her with a knife or gun.

While Pari stands there terrified, Leo whispers to her in a cold voice that he will make sure Pari dies a slow death.

Leo even gives Pari the phone which contains only ten percent battery and orders her to call whomever she wants for help.

Pari opens her mouth to stay say something but Leo hits her head with a gun causing Pari to fall unconscious.

On the other hand, during the driving, Rajeev orders Monty to go home so no one gets stressed for Rajeev and he will look around for Pari with Neeti.

Hearing this, Monty objects as Rajeev is not fully well to drive but Rajeev orders him to do what he says.

After Monty walks away, Rajeev starts driving and Neeti expresses that if anything happens to Pari, she will kill Rakesh.

In the meantime, Pari wakes up only to find herself in a closed coffin and starts struggling to free herself.

When Pari opens her phone, she finds every number is deleted but she calls the emergency number for help.

As soon as the police officer picks up the call, Pari begs him to save her life because she does not want to die.

When the police officer asks Pari about the location, Pari is only able to tell him that she is locked in a small box but she does not know the location.

The police officer calmly tells Pari that he can only help her if she tells the location but Pari announces that she does not know where she is in crying voice.

After the call gets cut, Pari again calls the emergency number and begs them to tell Neeti about it as she will find her location somehow but Pari's call gets cut again.

On the other hand, Mr. Ahlawat and Leo are busy celebrating their win and Leo expresses that Pari is special but Mr. Ahlawat announces he will bring a more beautiful girl for Rakesh.

Meanwhile, Neeti and Rajeev stop the car to check a police car that is standing near the road and get worried as they hear some strangers discussing two goons running away with a girl.

When Rajeev and Neeti inquire the tea stall owner about Pari, he reveals that he has seen two goons taking Pari away in a car which makes Neeti panic.

At the same time, Rajeev gets a call from Gurinder who orders him to come home but Rajeev announces that he will not come unless he finds Pari.

On one hand, Pari calls the mobile service operator to beg them to find Neeti who denies it; on the other hand, Biji gets shocked when Monty reveals that Ahlawat's goons have abducted her.