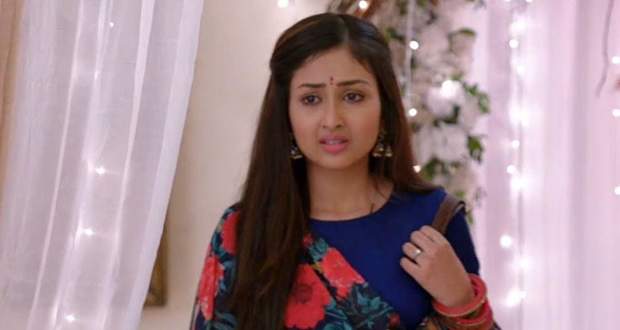 Today's Parineeti 5th May 2022 episode starts with Police asking Parineet the reason behind stealing clothes from the mall while she explains the situation.

The police officer hints to Parineet that her husband Rajeev might be a fraud and might have an affair with another woman.

Parineet denies it and says her husband is a nice man and respects women a lot.

The police officer feels sorry for Parineet and tells her to stay cautious about the bad people.

Meanwhile, Neeti jokes about forgetting the engagement ring for Sanju which makes him worried.

Later, Neeti and Sanju put rings in each other's hands and promise to stay together for a lifetime.

Sanju promises Neeti seven promises and counts on the three promises for the engagement day.

Meanwhile, the police officer advises Pari not to trust anyone so easily and never let anyone replace her.

The officer warns Pari about her husband who left her in hard times.

Sanju and his three vows for Neeti

On the other hand, Sanju speaks his vows of never letting anyone in between his and Neeti's relationship.

Sanju romantically kisses Neeti on her forehead and gazes at Neeti with love.

After the engagement ceremony, Neeti thinks of Parineet's husband negatively and worries for her friend.

Unfortunately, Neeti and Sanju walk inside the celebration hall and Parineet fails to see them on the road.

On the other hand, Gurpreet feels worried about Parineet and calls Vikram.

Vikram assures Parineet's well-being and tells her not to worry.

Rajeev's friend disguised as the groom

On the other hand, Rajeev's friends harm the police van which makes the officer angry.

The police constable enters the reception hall and orders the groom to meet the inspector or it will not be good.

Meanwhile, Rajeev's friend arrives in place of Rajeev and fixes the tire.

Rajeev's friend finds Parineet familiar and asks for her name.

Mandeep and her curse

Meanwhile, Mandeep is back with her complaints to Harman about not giving her enough respect.

Later, Harman shows Mandeep her place and tells her to shut up as Parineet is now his responsibility.

Mandeep curses Parineet that she will be threatened by her husband to get abandoned just like Harman is treating her.

© Copyright tellybest.com, 2020, 2021. All Rights Reserved. Unauthorized use and/or duplication of any material from tellybest.com without written permission is strictly prohibited.
Cached Saved on: Sunday 2nd of October 2022 04:56:05 AM