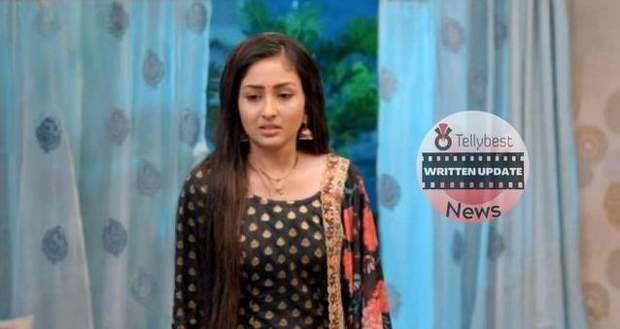 Today's Parineeti 5th September 2022 episode starts with Pari crying in her room because she has no place in Rajeev and his family's life.

She feels suffocated and as if her hands are tied as she cannot inform anyone about Rajeev’s betrayal.

While Pari is crying, Simmy interrupts Pari and urges her to come downstairs.

Simmy even taunts Pari for broken glass pieces and tears.

After Simmy leaves, Chandrika arrives there and takes a promise from Pari that Pari will tell her the reason behind Pari’s sad face once Dadi settles in the house.

After entering the house, Grandma starts teaching Parminder about traditions.

Parminder asks Pari about Rajeev’s whereabouts through her eyes but before Pari can answer, Rajeev arrives home.

In a cheerful voice, Rajeev takes a blessing from Grandma and starts telling her how much he has missed her.

He even lies to everyone that he was in office.

In the meantime, in the hospital, Neeti informs her friend in a worried voice that she thinks she is Sanju’s second wife.

As per Neeti, Sanju loves them very much but is not taking a stand for her in front of his family.

Hearing this, her friend gets silent for a minute as she knows the truth.

To calm Neeti down, her friend promises to talk to Sanju about it.

Later in Rajeev’s house, Grandma urges Rajeev to feed Pari with his hands.

At first, Rajeev denies it but after Grandma’s request, he agrees to it.

When Pari is coming forward for the ritual, Monty notices a bandage on Pari’s feet and asks her about it.

As expected, Pari lies again while Rajeev looks at her with concern.

While Rajeev is feeding Pari, she looks at Rajeev with angry eyes.

Noticing Pari’s anger, Rajeev starts assuming that Pari must have seen him with Neeti.

At the same time, Grandma notices Simmy talking to someone on her phone and starts lecturing Simmy about it.

After angry Simmy leaves, Grandma announces that she wants Rajeev and Pari to get married again in front of her eyes.

© Copyright tellybest.com, 2020, 2021. All Rights Reserved. Unauthorized use and/or duplication of any material from tellybest.com without written permission is strictly prohibited.
Cached Saved on: Sunday 2nd of October 2022 07:13:29 AMCached Disp on: Wednesday 5th of October 2022 05:06:09 PM