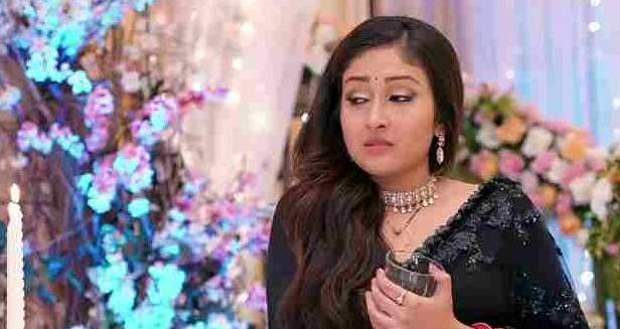 However, Monty comes and gets shocked seeing Sanju picking up Neeti's bridal style while Pari is watching them.

At the same time, Sanju and Neeti share their love for each other while Pari thinks of Rajeev highly as Rajeev saved Neeti.

However, Pari again hears someone praising Sanju as Neeti's husband.

Meanwhile, people start saying Sanju is Neeti's husband not Rajeev while Pari's head starts to get dizzy as she gets overwhelmed.

However, Pari sees Rajeev kissing Neeti's forehead while Pari blows up and starts to cry.

Meanwhile, Neeti runs to Pari and asks what happened while Sanju gets shocked because he forgot about Pari's presence after Neeti's incident.

However, Pari confronts Rajeev aka Sanju for betraying her while asking Neeti where Sanju is and asking why Rajeev kissed her.

Meanwhile, Neeti doesn't understand Pari's words and starts to reason with her.

At the same time, Monty advises Sanju to run but Sanju decides to reveal the truth.

Meanwhile, Pari tells Rajeev about people misunderstanding him and Neeti as a couple.

However, Pari reveals Sanju is Pari's Rajeev while Neeti confronts Pari saying this is Neeti's Sanju while accusing Pari of misunderstanding Sanju as Rajeev.

At the same time, Neeti and Pari demand the truth from Monty while he stays frozen.

Meanwhile, Pari accuses Neeti of betraying her while Neeti demands the truth from Sanju.

However, Sanju stays quiet while Natasha confirms that Neeti was introduced by Sanju as his wife.

Meanwhile, agitated Sanju reveals the truth saying he is the husband of Neeti while Pari's heart breaks into tatters.

However, Pari asks Rajeev about her relationship with her.

Meanwhile, Sanju is agitated and blames Pari as the biggest mistake of his life and tells her he loves Neeti.

At the same time, Sanju reveals the truth of marrying Pari for her sake as her father was begging for someone to marry her while Sanju's mother wanted Pari's land in the village.

Suddenly Neeti slaps Sanju while accusing him of being a cheater and tells him she doesn't want any relationship with him.

Meanwhile, Pari has no place to go and sees a knife on the table.

© Copyright tellybest.com, 2020, 2021. All Rights Reserved. Unauthorized use and/or duplication of any material from tellybest.com without written permission is strictly prohibited.
Cached Saved on: Saturday 1st of October 2022 10:49:48 PM