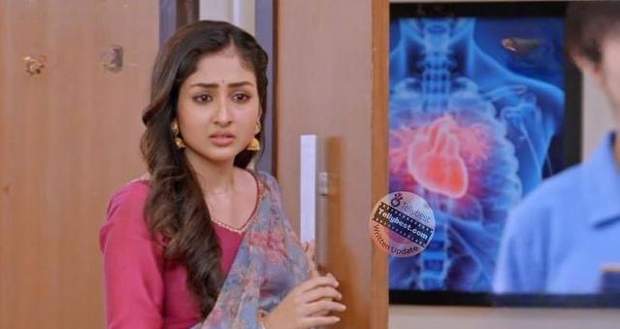 Today's Parineeti 6th December 2022 episode starts with Neeti blaming Pari that she is the other woman who is trying to take Sanju away from her.

Pari tries to defend herself by saying that she would never try to take Sanju from her.

However, Neeti tells Pari that she was the only one who was there for Pari.

Sukhwinder butts in and questions Neeti that she must have been confused as Pari can never do this to her.

Pari tries to explain but Neeti spills out that Pari did a fast for Sanju, and they were hiding a photo from her.

Sukhwinder questions Pari about how she could do something like this.

Further, she starts to insult Pari and says that Pari is nothing more than a backstabber.

Then, Neeti starts telling her that the people in the village used to call her bad luck but Neeti was the only one who was there for Pari while Parminder and Babli enter the room.

Hearing this Rajeev raises his voice and tells Neeti that she is doubting him for no reason.

Neeti shouts at him and says that she is talking to his second wife right now, Neeti tells Pari that she is incapable of having relations with anyone.

Frustrated Rajeev screams at her and says that she is just being selfish while Neeti says to Pari that because of her Sanju is talking to her like this.

Further, Neeti asks him why he did this to her and finds him stuttering.

Parminder intervenes and tells Neeti that if not for Pari Neeti would not even live in their house.

Enraged Parminder tells Neeti that Pari is an ideal wife and that Neeti will never be able to compete with her.

She further says that for her, Neeti will never be able to be a good wife.

Neeti tells Parminder that Pari is trying to become a sautan.

Parminder is about to tell Neeti the truth but Gurinder stops her and tells her that if it were up to her then Pari would have been thrown out.

Rajeev butts in and tries to defend Neeti but she tells him that she doesn’t need it. If he wants to defend anyone it should be Pari as she always needs support.

Further, Gurinder tells that Pari is an opportunist and she should leave.

Parminder starts to tell the truth about Rajeev but Pari stops her and says that she is the reason for all their problems.

Neeti tells that she will tell Pari’s mother about all the things Pari has been doing.

Hearing this Pari starts to beg Neeti to not do that as her mother has heart problems.

Babli intervenes, starts to spill the truth, and blames Rajeev and Neeti for the reason for Pari’s tears.

Further, Babli tells Gurinder that they were the ones who came to ask for Pari, and that is the sole reason for this.

© Copyright tellybest.com, 2022, 2023. All Rights Reserved. Unauthorized use and/or duplication of any material from tellybest.com without written permission is strictly prohibited.
Cached Saved on: Wednesday 25th of January 2023 06:20:27 PMCached Disp on: Tuesday 31st of January 2023 07:53:30 PM