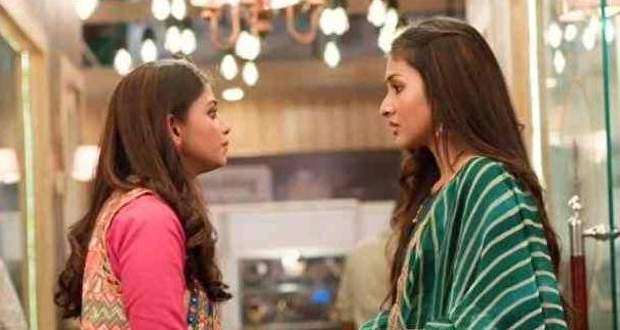 Meanwhile, Neeti takes away Parineet's Mangalsutra from her neck and the sales girl points it out.

On the other hand, the old lady nearby also asks Neeti to give back Parineet's Mangalsutra or she will interlink her relationship with Parineet's husband.

Meanwhile, Neeti says that there is nothing like that and is orthodox thinking but Parineet feels otherwise.

Later, Neeti gives Parineet's Mangalsutra back and calls her traditional.

After some time Neeti and Pari leave for their homes.

After reaching home, Neeti sees Sanju at her place and gives him news about her mother's arrival at the wedding.

Feeling emotional about how Sukhwinder wanted to see Neeti in her wedding dress, Neeti asks if he is okay with her decision.

Sanju happily agrees to Neeti's decision and Neeti gives him a hug.

Later Neeti feels lucky for having a guy like Sanju and says 'I Love You' while Sanju comes back and hugs Neeti back.

Further, Rajeev arrives back home while Amit talks to him about Parineet's cooking and she is getting offers about catering.

Later, Monty asks Rajeev if he didn't call Parineet back to appreciate her cooking as he talked about not getting close to Parineet.

Rajeev admits that he did call Parineet to let her know about her cooking skills and how his boss liked her preparations.

After some time, Parineet asks Rajeev if he is fine with her working outside the house to which Rajeev agrees.

Parineet feels happy and his permission made Pari think of her late father Jaswant.

Further, Rajeev falls asleep on his conference call while Pari tucks him into bed with affection.

Later, Parineet gazes at her husband Rajeev while Rajeev sleeps.

Rajeev wakes up the next morning and thinks Parineet must have tucked him in bed and walks into the kitchen to find her.

Further, Rajeev smiles looking at Parineet while she smiles with Chandrika.

Later, Rajeev catches himself gazing at Pari and corrects himself, and orders a cup of tea.