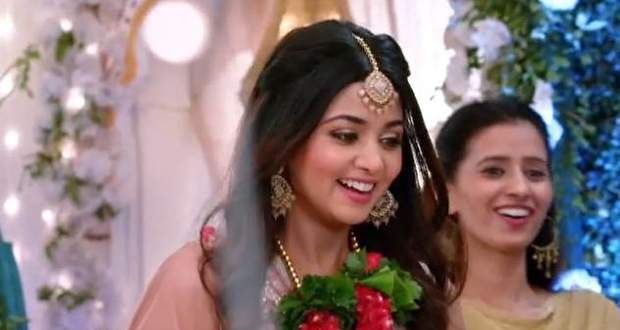 Today's Parineeti 6th May 2022 episode starts with Rajeev walking outside the ceremony hall to save his friend from getting arrested.

Meanwhile, Parineet saved Ajay by making the police inspector realize his mistake that he should not arrest anyone and misuse his position.

Later, Parineet arrives at the police station where she pleads with the new officer to call her husband one last time.

Neeti picks up the call for Rajeev

Meanwhile, Rajeev leaves his cell phone on the table where Neeti notices an incoming call.

As Neeti picks up the call she notices that it is not her cell phone and gives it to Sanju.

Sanju is informed about Parineet and he asks for help from his friend Ajay.

Sanju is on the verge to get caught

Later, Sanju is scared of getting caught by Ajay and his dad and his secret wife Parineet might get exposed after this incident.

On the other hand, Neeti waits for Sanju and looks for him in the corridor.

Meanwhile, Parineet cries for help and requests the police officer not to put her in the lock-up.

Angry Rajeev blasts the quality of the road and curses the government.

Later, Rajeev creates a situation of accident and bumps into a car to avoid Ajay to accompany him to the police station.

Meanwhile, the man who got injured by Rajeev's car gets into an argument with Ajay.

On the other hand, Rajeev scolds the mall manager as he created a big problem for him.

Meanwhile, the manager gets adamant and refuses to take back the filed complaint.

Rajeev throws many on the manager's face

Later, Rajeev decides to teach him a lesson to do a live video and post his bad review about the manager's treatment of his customers.

Scared to get a bad testimonial, the manager agrees to take back his complaint while Rajeev throws the cost of the dress on his face.

Meanwhile, Parineet is rescued and the police constable appreciates her husband's trust in Parineet.

Irritated by Parineet's silly mistake, Rajeev fumes with anger and walks toward her.

On the other hand, Parineet hugs Rajeev tightly and expresses her thankfulness.

Parineet cries the tears of apology while Rajeev wipes her tears.

Even though Rajeev is angry, he acts like a gentleman and holds Parineet's hand, and walks her towards the car.