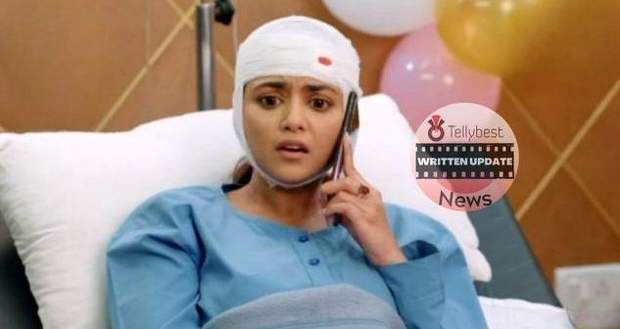 Today's Parineeti 6th September 2022 episode starts with Grandma urging Rajeev and Pari to get married again as she wants to see her grandson getting married.

Rajeev tries to deny it but everyone starts urging him and Pari to marry.

Chandrika then announces to everyone that she will be the one to do Pari’s wedding makeup.

Hearing this, Grandma orders Chandrika to stay away from the makeup as Chandrika will make Pari look like a ghost.

Grandma even scolds Chandrika’s husband for choosing a Bengali wife instead of a Punjabi one.

Before Pari can say anything, Mandeep and Harman arrive at Rajeev’s house.

Seeing them, Pari gets stunned and decides to stay silent.

Later when Parminder asks Pari whether she wants to marry Rajeev or not in an excited voice, Pari just nods.

As expected, everyone gets happy and starts celebrating while Pari leaves abruptly in anger.

Meanwhile, Pari locks the door behind her and starts cursing her luck as she thinks Rajeev is playing with her and Neeti’s life.

However, she wipes her tears away when she hears a knock on the door.

After entering the room, Rajeev urges Pari to forgive him as this kind of misunderstanding can happen between any couple but Pari ignores it.

Pari even tries to leave but Rajeev stops her by holding her hand.

With a sigh, Pari turns and informs Rajeev that she knows his truth now which makes Rajeev confuse.

Before Rajeev can ask anything, Pari orders him to say no to the marriage.

Seeing Pari’s attitude, Rajeev starts thinking to himself that Pari is acting like a wife.

While Rajeev and Pari are arguing, Rajeev gets a call from Neeti.

Noticing the name, Pari taunts Rajeev by saying that he should go office since his boss is calling him.

In the meantime, Harman gifts cake to Parminder and Tayaji for the anniversary and Chandrika goes to call Pari and Rajeev to join the function.

However, Chandrika overhears Pari and Rajeev arguing and interrupts them.

She even urges Pari and Rajeev to tell her what’s wrong but both get silent.

After Pari and Chandrika leave, Rajeev starts talking to Neeti on call.

Elsewhere while Grandma is bossing everyone around, Gurinder arrives at the doorstep.

Seeing Gurinder, Pari goes to inform Rajeev about her and overhears Rajeev’s love confession to Neeti which fuels Pari’s anger.

Later while cutting the cake with Parminder and Tayaji, Pari and Rajeev look at each other with hatred.

© Copyright tellybest.com, 2020, 2021. All Rights Reserved. Unauthorized use and/or duplication of any material from tellybest.com without written permission is strictly prohibited.
Cached Saved on: Monday 3rd of October 2022 02:27:12 AMCached Disp on: Wednesday 5th of October 2022 05:26:54 PM