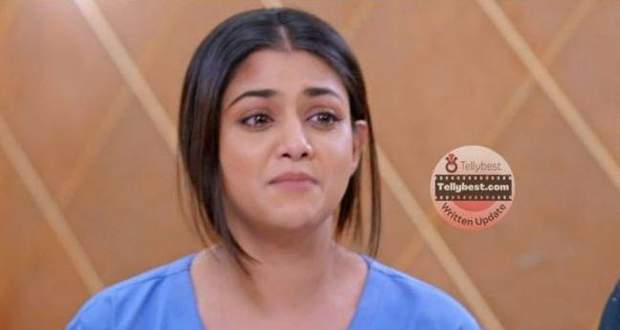 Today's Parineeti 7th December 2022 episode starts with Pari urging Babli not to tell anything to anyone as they are going to Barnala soon.

Neeti, however, urges Pari to spill the full truth otherwise she will not be able to sleep or die properly but Pari orders Neeti to just focus on Sanju loving her very much.

Babli who is filled with rage after seeing Neeti's rude behavior yells that Sanju and Rajeev both are the same people but Neeti starts laughing as she does not believe it.

When she notices everyone's tensed faces, she realizes Babli was telling the truth and looks at Rajeev with disbelief who in return lowers his gaze in shame.

Neeti feels shaken after hearing the truth and runs out of the room while recalling her wedding memories.

On one hand, Gurinder scolds Babli for ruining everything but Babli yells that she should have thought about it before ruining Pari’s life; on the other hand, Pari and Rajeev run after Neeti to stop while calling her name nonstop.

Neeti who was running down the stairs in a hurry falls and hits her head due to which she is unconscious by the time Pari and Rajeev reach her.

Rajeev frantically calls the nurse who announces that they need to take Neeti to the hospital room and Rajeev obeys.

After a long anxious wait for Pari and the Bajwa family, the doctor comes out of the room and informs Rajeev that Neeti has lost her baby.

Rajeev looks at the doctor with wide eyes and Pari comes out of her nightmare.

Pari then tells herself sacredly that she will not let this nightmare come true so she will make things right.

Looking at the photo, Pari decides she will clear Neeti’s doubt and enters Neeti's room.

Pari then tells Neeti that nothing is going on between her and Rajeev and they are just good friends.

Even after hearing this, Neeti looks at Pari with skeptical eyes and reminds Pari that she has seen Rajeev close to Pari many times.

When Neeti asks Pari if Sanju tells her everything, Pari replies negatively and she is about to show Neeti the photograph but Rajeev along with the doctor interrupts them.

Rajeev takes Pari away to meet another doctor leaving Neeti to think they are hiding something.

Outside the room, Rajeev questions Pari about what she was thinking, and Pari replies that she will put someone else in this picture to keep Neeti in dark.

When Rajeev tries to change Pari's mind by questioning her about what she will do if Neeti wants to meet Rajeev, Pari replies that she will present another Rajeev in front of Neeti.

Pari further adds that she will do anything to keep Neeti stressed free and the doctor then informs Rajeev that he can take his wife home now.

Later, while Pari and Rajeev are discussing how they will clear Neeti's doubt about them, Neeti overhears them.

© Copyright tellybest.com, 2022, 2023. All Rights Reserved. Unauthorized use and/or duplication of any material from tellybest.com without written permission is strictly prohibited.
Cached Saved on: Wednesday 25th of January 2023 08:41:35 PMCached Disp on: Thursday 9th of February 2023 04:04:48 AM