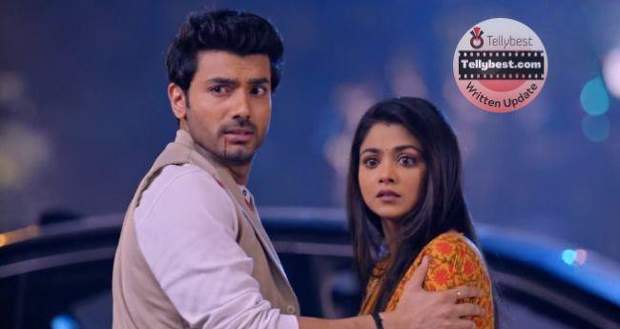 Today's Parineeti 7th January 2023 episode starts with Neeti consoling Pari to not cry while telling her that they will find her soon.

Neeti tells her to find a way to open the box while Pari cries and says that she feels like her life is giving out.

Pari tells Neeti that she heard the Christmas jingles as she was being put in the box.

Neeti tells Pari that they have reached the minister's house and will soon find her location.

The call disconnects while Pari sees sand coming into the box through the crack and cries as she realizes that the box is underground.

Elsewhere, Neeti and Rajeev reach Ahlawat Singh's house and demand to know Pari's location as they know Leo was after her.

Ahlawat laughs maniacally as he says that Leo has put Pari where she belongs.

However, Neeti tells them that Pari is alive and that they will soon find her.

Monty tells Rajeev and Neeti that they should go to the police.

As they leave, Ahlawat demands to know how Neeti found out about Pari being in a box to which Leo reveals that he has put a phone in the box along with Pari.

Ahlawat scolds Leo and says that he is dumber than Rakesh and asks him about Pari's location.

Leo tells him that he has put Pari's box at the funeral site near the border as he assures Ahlawat that Pari will be dead before anyone can find her.

Back in the box, Pari's legs get trapped as the dirt continues to dribble into the box through the crack.

Pari cries while praying for Neeti to come soon.

On the other hand, Neeti, Rajeev and Monty reach the police station and tell the police officer to track Pari's cellphone.

Rajeev calls Pari and hands it over to the police who tell Pari to keep her phone on at all times.

Pari tells him that the phone's battery is about to die while the police officer tells her to not use her phone and tells Neeti that they have given the call to the company to trace.

Neeti again calls Pari and gets hysterical when she doesn't pick up the call while Pari tries to find her phone.

Pari finds her phone and calls Rajeev while Neeti takes the phone and asks Pari why she isn't picking her calls.

Pari tells her that she is losing herself and was trying to find the phone.

Rajeev takes the call and Pari cries as she tells him that dirt is being filled up in the box.

Rajeev tells her to look for some kind of clue and she turns on the flash after which she finds the address of the shop where the box was made and tells it to Rajeev.

Meanwhile, Ahlawat rebukes Leo and kicks him out of the house while blaming him for everything.

Ahlawat threatens Leo and tells him that he will be dead if Pari ends up being alive.

On the other hand, Rajeev, Neeti and Monty find the box shop and shout for someone to open it up.

Rajeev stops a passerby and asks him about the owner while the man prays to God thinking that someone from Rajeev's family has died.

Rajeev gets confused while the man reveals that the shop makes coffins for dead people which are put in funeral sites.

Rajeev gets worried as he rushes and informs Neeti and Monty.