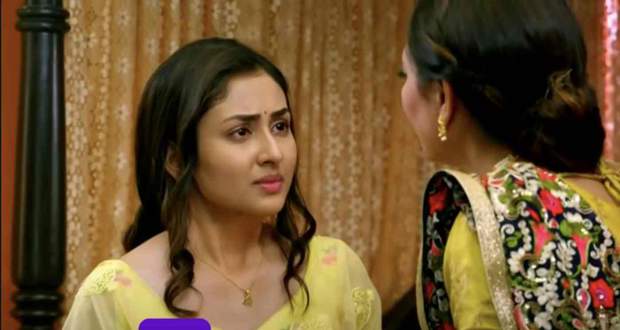 Today's Parineeti 7th March 2022 episode starts with Mukhiyaji asking Pari about committing suicide and reading her answer in her tears.

Mukhiyaji takes Ashok to task and shames them for asking dowry.

Pinky abuses Pari and talks about doing a favor on Jaswant's family by marrying Varun to Pari for no one else will marry Pari.

Meanwhile, MLA reminds Rakesh of all that happened with Pari and the video that Neeti has of them, and above all, how he cannot risk elections.

However, Rakesh keeps on insisting on marrying Pari which makes MLA lock Rakesh in a room while instructing Shera to not let Rakesh out of his room or sight.

On Pinky’s accusations, Poorvi calls Pari an angel who will bless the house she will go in.

Arriving late at the party, Kulwant Kaur agrees with Poorvi and asks Pinky to forget Pari and think of Varun instead, for no one will give their daughter to such greedy people.

Folding his hand to appease Ashok, Jaswant again requests to go on with the wedding.

While he is about to put his 'Pagdi' on Ashok's feet, Raj intervenes and stops Jaswant saying that he has nothing to be ashamed of.

After the departure of Varun's family, Gurwinder offers Raj's hand in marriage for Pari if Jaswant agrees.

Rajeev is speechless at her mother’s proposal while Gurwinder even agrees to marry Pari and Raj then and there.

At MLA's house, Rakesh tries to convince Shera to let her go to Pari’s wedding for a while to which Shera agrees after a while.

Later, Jaswant praises Raj saying he would be honored to have a son-in-law like Raj.