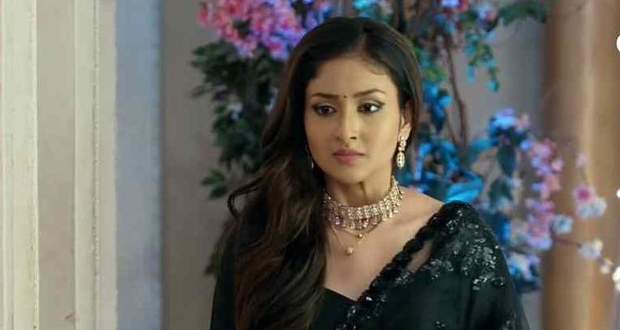 Today's Parineeti 8th August 2022 episode starts with Pari deciding to commit suicide with a nearby knife.

On the other hand, Sanju is trying to change Neeti’s mind but he stops abruptly when they hear Pari’s scream.

However, Rajeev comes out of his nightmare after hearing Neeti’s concerned voice.

Neeti asks him again if he is okay or not.

Instead of answering, Rajeev hugs Neeti and takes a promise from her that she will not believe anyone except him.

He even starts telling Neeti that he loves her very much and will not betray her.

When they return to the sangeet function, Natasha’s parents tease them about it.

According to Natasha’s dad, Sanju and Neeti are newly married so they deserve to spend some time alone time.

However, Rajeev is in a dilemma as he thinks he is betraying Neeti by hiding Pari.

At the same time, Pari notices Sanju (Ajay) taking Shreya to another room.

While Shreya is accusing Ajay of cheating on her with Neeti, Pari eavesdrops on them.

At first, Pari thinks of calling Neeti but realizing she needs solid proof she listens carefully.

She even compares Sanju with Rajeev.

Elsewhere, during chitchat with Neeti, Natasha asks her if she trusts Sanju.

Confident Neeti announces that Sanju loves her very much.

Before they can continue, Pari arrives there and takes Neeti aside.

She then urges Neeti to come with her to witness the truth.

Hearing this, Neeti explains to Pari that she is misunderstanding Sanju again.

However, adamant Pari reminds Neeti about her advice of not trusting Rajeev blindly.

On the other hand, Ajay is trying very hard to make Shreya understand that he only has eyes for her not someone else.

He even grabs Shreya’s hand to stop her from leaving.

Blind with anger, Shreya refuses to listen to anything.

© Copyright tellybest.com, 2022, 2023. All Rights Reserved. Unauthorized use and/or duplication of any material from tellybest.com without written permission is strictly prohibited.
Cached Saved on: Monday 21st of November 2022 07:33:04 AMCached Disp on: Friday 9th of December 2022 06:32:28 PM