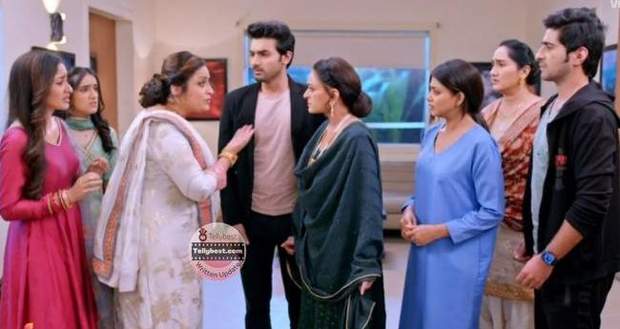 Today's Parineeti 8th December 2022 episode starts with Rajeev telling Pari that they need to do something so Neeti does not think about them.

Neeti who has overheard the conversation asks Rajeev what they are talking about and Pari urges Neeti to come home so she can clear the misunderstanding.

Later in Bajwa’s home, Rajeev tries to help Neeti with the pillow but Neeti orders him to stay away from her in an angry voice.

Hearing Neeti’s rude voice, Rajeev urges Neeti to stop being angry who reminds Rajeev about his inappropriate closeness with Pari.

While Rajeev trying to win Neeti back, Biji is walking past the room and she notices Neeti close to Rajeev.

She starts taunting Neeti for coming close to Rajeev after entering her room. Neeti asks Biji if she likes Pari very much and Biji proudly adds that everyone in the family likes Pari in the house.

Biji further adds that Parminder considers Pari more like her own daughter and Neeti gets upset thinking she is the daughter-in-law of the family but everyone loves Pari.

On one hand, Biji thinks she will taunt Neeti a little as she is very ill; on the other hand, Rajeev is anxiously waiting for Pari so she can take Biji away.

Pari arrives there just then and after Rajeev drags Neeti away, Pari orders Neeti to eat soup.

When Neeti denies it, Pari questions her why she is punishing her unborn child in a firm voice.

Neeti then tells Pari that they are childhood friends and she will not bring the topic up again if Pari clears her doubts.

Neeti even urges Pari to show her the picture like a stubborn kid despite Pari’s protest but before they can walk out of the room, Gurinder arrives there.

Gurinder urges Neeti to eat and Pari runs away from there.

After Pari walks away, Gurinder urges Neeti to spill if she is hiding something but when Neeti denies it, Gurinder thinks she will lose control of Neeti too.

On the other hand, Rajeev orders Monty to replace another person’s face in the photo with someone new as Rajeev.

Monty agrees to do it but also mocks him for having two wives while Rajeev gives him the death glare.

Later, when Pari calls Rajeev to inform him about Neeti’s wish to see the picture, Neeti arrives there and urges Pari to show her the picture.

Rajeev gets scared seeing Pari cut the call without any more words and urges Monty to finish the work early.

Meanwhile, in Pari’s room, Neeti orders Pari to show the picture quickly but Pari gets confused to see the picture is not in the closet.

On the other hand, while Monty is making the image, Parminder arrives there and scolds him for not submitting the bill on time.

After a while, Monty finishes the work while Rajeev orders Pari to keep Neeti busy for some more time.

Meanwhile, Neeti announces that if Pari does not have the picture, Rajeev must have it, and she dials his number.

© Copyright tellybest.com, 2022, 2023. All Rights Reserved. Unauthorized use and/or duplication of any material from tellybest.com without written permission is strictly prohibited.
Cached Saved on: Wednesday 25th of January 2023 07:28:53 PMCached Disp on: Thursday 2nd of February 2023 07:47:11 PM