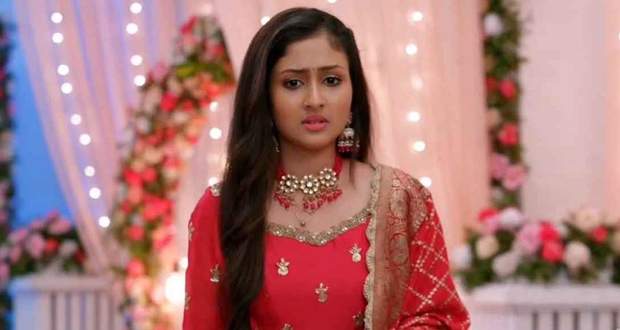 Today's Parineeti 8th July 2022 episode starts with Parineet overhearing Shreya's conversation and runs to inform Neeti that the man behind Sehra is Ajay and not Sanju.

Trying to tell Neeti the truth, Parineet says that she should be strong after hearing the truth from her.

As Parineet is about to tell the truth, Monty diverts them for Rajeev's special dance.

Rajeev and Monty dance to a Punjabi song and Rajeev wear a Sehra to hide his face.

Parineet pulls Neeti and tells them that Sanju is not there behind the Sehra and it is Ajay instead.

Neeti is shocked while Sukhwinder suffers a panic attack and is unable to believe Pari.

In order to find out the truth, Neeti unveils the groom's face while the priest suggests looking at it indirectly.

Neeti unveils the groom's face to see his reflection and finds out Sanju behind it which calms Neeti down.

Later, Shreya and his friend explained that they were talking about a play and not real Sanju and Ajay.

Parineet holds Neeti and Sanju's hands together and requests Sanju to keep her happy no matter what.

Further, Parineet notices the suspicious lady taking Mishika along with her and follows her while Sanju and Neeti get married.

The suspicious lady confesses that she is a child trafficker which shocks Parineet.