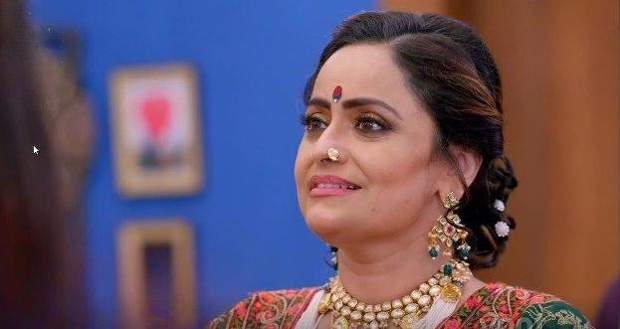 Further, Simmi plans on using the fake material for the Hawan ingredients to teach Parineet a lesson.

Meanwhile, Sukhwinder meets Parminder and she invites her to Neeti's wedding with her family.

On the other hand, Parminder scolds Chandrika for not informing her about Rajeev's absence beforehand.

Later, Rajeev arrives at the Bajwa mansion and hides Sukhwinder's bag in a paper bag.

As soon as the puja starts Rajeev sits beside Pari and the priest adds Hawan ingredients to the fire.

The smoke from the fire chokes the family members and Parminder and Sukhwinder sit away from the smoke by keeping their eyes shut.

Further, Rajeev introduces himself to Sukhwinder and takes her with him away from the smoke.

Sukhwinder and Parminder keep their eyes closed while Parineet helps them out by giving them Gulab Jal.

Later, Simmi arrives and takes Pari and Rajeev back to the Puja while Rajeev holds Parineet by her hand and guides her to the main hall.

Parineet gazes at Rajeev while Rajeev asks to stay with him as he will feel comfortable beside her.

Meanwhile, Sukhwinder walks past Pari and Rajeev while Pari covers Rajeev's face and Sukhwinder misses to see his face.

Later the priest brings a new pack of Hawan ingredients and continues with the Puja.

Parineet and Rajeev complete the Puja smoothly while Neeti waits outside her office as there is a taxi strike in the city.

Further, Neeti calls on Sanju's cell phone while Parminder takes away his phone to avoid any disturbances.

After the completion of Puja, Rajeev takes away his phone and assures his arrival in ten minutes to Neeti.

Further, Sanju picks up Neeti and returns Sukhwinder's purse back.

Later, Sanju and Neeti talk about impressing Sukhwinder and picking her up from her friend's house.

Sukhwinder feels happy that Parineet has adjusted well to her household and wishes the same for her daughter.