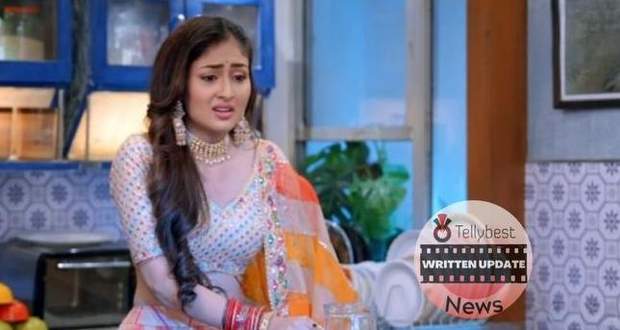 Today's Parineeti 8th November 2022 episode starts with Gurinder telling Rajeev and Neeti that this is their first Diwali, so Neeti and Rajeev will do the first aarti.

Neeti then urges Pari to bring Kumkum while Parminder gets sad thinking that even though Pari is bringing Kumkum, she does not have any authority over her Kumkum aka Rajeev.

Later Neeti gets stunned to see Kumkum on Pari’s forehead and excitedly informs Pari that something good will must happen to Pari this Diwali.

While everyone looks at Pari with stunned expressions, Simmy orders Neeti to start the puja.

Neeti however asks Gurinder who will read Lakshmi Katha and Monty urges Parminder to read but Parminder orders Pari to read instead of her.

As soon as Pari gets done with the reading, Gurinder tells Neeti and Rajeev to do the aarti together.

Neeti’s feet go numb due to pain and she falls on her back with a thud but Pari holds the aarti thali just in time.

On the other hand, Mandeep yells at Gurpreet and Harman as soon as they enter the house.

She even accuses Gurpreet of using Harman for her own benefit in a stern voice.

Harman is about to slap Mandeep for it but Gurpreet stops her.

After Mandeep runs away crying, Gurpreet exclaims that they should be celebrating Diwali happily but instead, they are fighting now.

Later, Pari feels guilty while recalling the day’s event and questions God why Rajeev is getting close to her now when Neeti is already his wife.

She further announces that she is coming between Rajeev and Neeti so she will leave the next morning.

Meanwhile, Tayaji informs Parminder that Pari and Rajeev are best for each other but Parminder reminds him that now Neeti is Rajeev's wife so Pari will never get her happiness.

Parminder then gets a call from Dadi who informs Parminder about her coming and cuts the call making Parminder nervous.

Parminder then meets Gurinder and informs her about Dadi’s arrival.

Parminder also adds that Dadi wants to give property to Pari and Rajeev and Gurinder happily announces that now Neeti is Rajeev’s wife so indirectly she will get the property.

Parminder tries to remind Gurinder that if she refuses to give a share to Pari then Parminder will tell Dadi the truth.

Later, while everyone is busy preparing the house to welcome Dadi, Neeti arrives there and orders Pari to take a rest.

Neeti even tells Pari that she is the daughter-in-law of the house so it is her responsibility to decorate the gate.

Pari along with Rajeev orders Neeti to take a rest as she is pregnant and Neeti walks away.

Later while decorating the gate, Pari and Rajeev get into a banter.