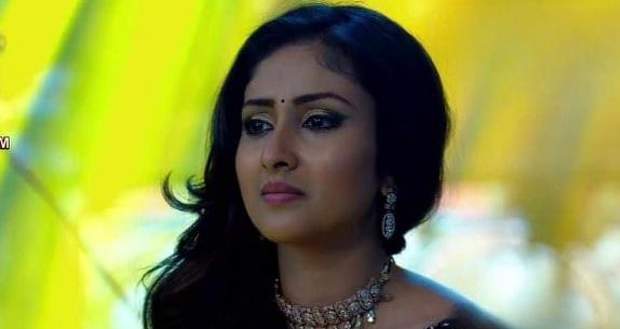 Today's Parineeti 9th August 2022 episode starts with Neeti telling Pari that this is the last time she is going with her.

Elsewhere while Naman and Natasha are doing romance, Rajeev arrives there.

When Naman informs him that Neeti and Pari have gone somewhere with each other, Rajeev thinks Pari will create more problems for him.

On the other hand, Ajay calls his friend to prove to Shreya that he is innocent.

After hearing the same thing from the friend, Shreya believes Ajay but orders him to get out of this mess.

Ajay agrees and they both decide to leave the party.

On one hand, Neeti is trying to fix her saree, and on the other hand, Pari notices Sanju (Ajay) and Shreya in the lift.

Before she can call Neeti, Ajay closes the lift door quickly.

Not wanting to waste the opportunity, Pari grabs Neeti's hand and runs down the stairs quickly.

At the same time, Rajeev also arrives at the entrance and asks Ajay why he is leaving.

When Ajay and Shreya both advise Rajeev to look for some other way, he starts begging him for help but Shreya is adamant.

Seeing Sanju following Shreya, Neeti is sure that Sanju is cheating.

However, they are interrupted by Natasha who starts chitchatting with Pari.

She even notices Sanju getting into a car with Shreya.

Pari then calls a cab and they both get into it.

During the car ride, Neeti reveals Sanju has not told his family about them.

With widened eyes, Pari orders Neeti to steal Sanju's phone so she can learn about the girl.

Thanking Pari for her advice, Neeti gets out of the car and enters her empty house.

Once inside, Pari recalls her sweet memories with Sanju and feels even worse.

She can't digest that her sweet Sanju can betray her.

After arriving home, Sanju tries to beg forgiveness from Neeti for ditching her like that but she refuses to listen.

He accepts Neeti's accusations and announces that indeed he has a girlfriend.

This revelation shakes Neeti and she asks him how long the relationship is going on.

Hearing this, Rajeev informs her that this is going on for a while.

Afterward, he asks Neeti if it is what she wanted to hear.

© Copyright tellybest.com, 2020, 2021. All Rights Reserved. Unauthorized use and/or duplication of any material from tellybest.com without written permission is strictly prohibited.
Cached Saved on: Tuesday 9th of August 2022 09:12:01 PMCached Disp on: Sunday 14th of August 2022 12:50:42 PM