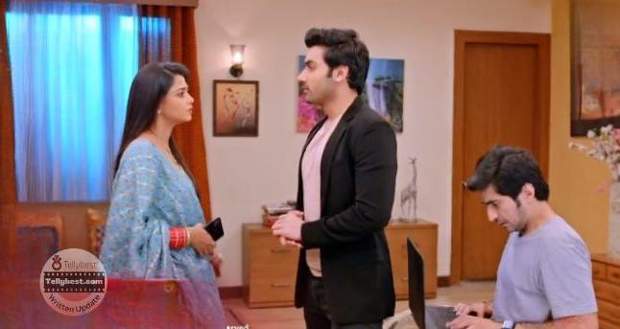 Today's Parineeti 9th December 2022 episode starts with Rajeev getting Neeti's call and telling Monty that he will silence it or else she will ask many questions.

Meanwhile, Neeti finds Sanju in Monty’s room and asks him what he is hiding as he worries about being exposed and curses Pari for not stopping Neeti.

Just then Monty shouts with joy at having accomplished his task & shows the picture to Neeti that she was asking for whereas Neeti asks him who is the other person.

Shaming Neeti for calling herself Pari's friend, Rajeev tells Pari to tell Neeti who is in the picture.

Pari tells Rajeev that the person beside her is Rajeev but Neeti asks Sanju why she is not in the photo but he is.

Rajeev lies about Pari’s husband being a client while Neeti asks Pari to confirm what Sanju is saying.

Pari tells her to let it go as friends don't hold grudges, stating Neeti is more important to her than her life.

Neeti goes to Sanju to apologize while Sanju playfully tells Neeti that sorry won't do.

Meanwhile, Monty praises Rajeev for fooling two wives together under the same roof.

Sanju tells Neeti to go and wait for her in the bedroom where he will decide whether she is forgiven or not.

Later, Monty tells him to think of a way to get rid of this double role and double marriage before things go out awry.

Meanwhile, Pari thanks God for saving Neeti from finding out the truth and wonders who the other person is.

After a while, Rajeev tells Pari that he has used his friend's picture who lives in London and hardly comes to India.

Hearing Rajeev’s words of gratitude, Pari tells him that she is doing all this for Neeti and would never do this if she was not helpless.

Afterward, Sanju comes to Neeti’s room where Neeti is waiting for him but he ignores her and goes to change.

Neeti gets an idea to appease him and writes a sorry note to him & tells him to talk to her and she will do anything to make up with him.

Just then, Sanju comes to Neeti and hugs her from behind.

Pari thinks about Rajeev praying for Neeti and calling her his one and only love.

She thinks to go from there soon, else the truth will get out.

Pari believes Neeti to be possessive of Sanju and thinks that she will break her friendship with her if Neeti finds out about it.

Meanwhile, Parminder comes to talk to Pari and asks her how long will she hide the truth.

She tells her that she wants to go from here so Neeti never finds out about her or Rajeev.

Later, Parminder asks Pari what has she thought about her life and what she wants to do with it.

Pari sighs thinking about her life and tells her that although Rajeev never loved her, she has always loved him.