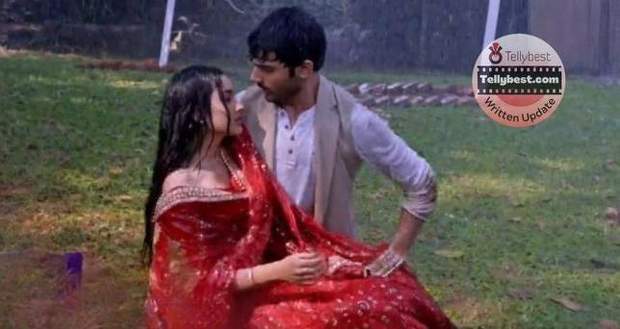 Today's Parineeti 9th January 2023 episode starts with Rajeev figuring out that Pari is locked inside a coffin and deciding to call Pari so that they can reach her quickly.

Neeti gets anxious thinking about Pari’s condition and asks Rajeev to look for Pari immediately.

Rajeev receives a call from the police who inform them that they have traced Pari’s location as the Carmel Church.

Without wasting any more time, Rajeev asks Monty to drive their car to the church so that they can save Pari.

As Rajeev, Neeti, and Monty reach the location in between the rain, Rajeev asks Neeti to sit in the car as she should take care of herself and her baby.

Rajeev enters the graveyard and continuously screams Pari’s name so he can get a slight hint or response.

Breaking down in tears, Rajeev asks himself where Pari is as he will never be able to forgive himself if something happens to her.

Rajeev notices that there is no grass on a certain grave whereas grass is present on others.

Meanwhile, Mr. Ahlawat tells Leo that he is a disappointment to him after the work he has done which angers Leo.

Rajeev finds a shovel and digs that grave quickly to discover the coffin underneath.

On opening the coffin, Rajeev sees more soil inside and begins to throw them out with his hands.

As Pari’s face appears, Rajeev carries her outside the coffin and tries to wake her up.

Without having any other option, Rajeev provides mouth-to-mouth CPR to Pari so that she comes to her senses.

Pari revives her consciousness while Rajeev continues to check on her which Neeti watches standing behind them.

Pari asks Rajeev about himself and Neeti and gets happy to see Neeti standing behind Rajeev while Neeti snaps out of her thoughts.

Neeti and Pari hug each other dearly and thank god as nothing happened to either one of them.

Rajeev feels guilty for coming between the two friends and destroying their lives in such a manner.

At the same time, Leo tries to shoot Pari with his gun but gets caught by the police while targeting his aim.

After everything gets resolved, Neeti hugs Rajeev while Rajeev holds onto Pari’s hands so that she does not leave.

On the other hand, Dadi waits desperately for Pari and Rajeev as she believes that Pari will give her grandchildren very soon.

Parminder suggests Dadi rest a bit but she denies doing so and asks Gurinder not to chant Neeti’s name all the time.

Rajeev, Neeti, and Pari reach home and assures Dadi that they are fine now which makes Dadi happy.

Dadi starts the arti but gets displeased to see Neeti standing there as she does not like her.