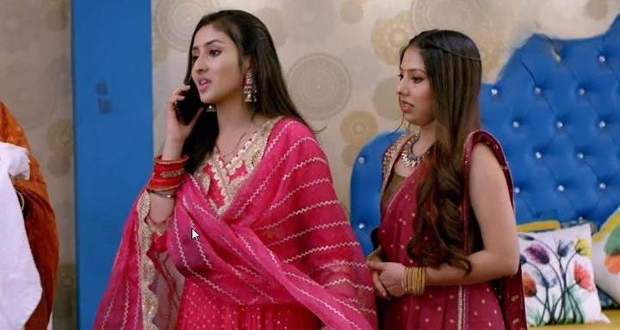 Today's Parineeti 9th June 2022 episode starts with Neeti suggesting Sanju go back home instead of picking Sukhwinder up as she will scold her for not keeping her house tidy.

Meanwhile, Amit offers to drop Sukhwinder off as it is a taxi strike while Simmi stops Pari from leaving.

Sanju and Neeti tidy up the house before Sukhwinder arrives while Neeti shows him the Mangalsutra similar to the one Pari has.

Later, Sukhwinder arrives at Neeti's door while Neeti hides Sanju as her mother is old school and will feel awkward if she finds him.

As soon as Sukhwinder arrives, Rajeev tries to leave while she notices him and smiles.

On the other hand, Parineet smiles daydreaming about Rajeev and their moments spent together.

Later, Rajeev arrives and Pari shows him the moon, feeling romantic with him.

Rajeev asks Pari why she didn't scold him for arriving late which makes Rajeev feel bad for Parineet and her loyalty.

Rajeev looks at Pari thinking how selfless Parineet can be and sleeps after some time.

The next morning, Neeti leaves for the office and informs us that Parineet will be shopping for her wedding.

Shera informs Rakesh about Parineet which shocks him and watches her on a video call.

Later, Parineet notices someone following her and stops midway.

Meanwhile, Rakesh thinks of all the drama he created to get Parineet in his life.

© Copyright tellybest.com, 2020, 2021. All Rights Reserved. Unauthorized use and/or duplication of any material from tellybest.com without written permission is strictly prohibited.
Cached Saved on: Thursday 9th of June 2022 11:53:20 PMCached Disp on: Saturday 25th of June 2022 05:15:28 PM