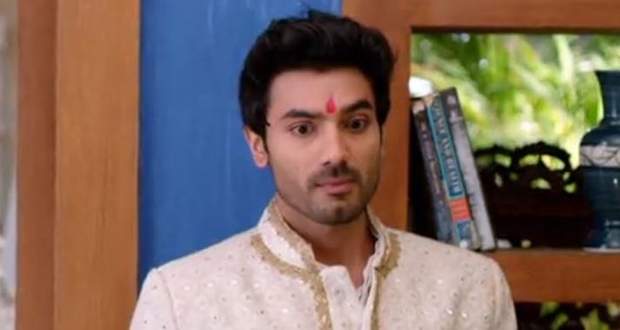 Today's Parineeti 9th May 2022 episode starts with Rajeev going to sleep and asking Parineet to turn off the lights immediately.

Parineet wanders slowly around the room but decides to sleep in her party dress only as she does not want Rajeev to wake up.

After Parineet sleeps, Rajeev sneaks out of there to go to the party where Neeti will be waiting for him.

Meanwhile, Neeti plans to surprise Parineet by visiting her in-laws along with Sanju as Parineet missed their engagement.

Parineet watches a horrendous dream where Rakesh was trying to kill Rajeev by breaking into their room and wakes up in fear.

On waking up, Parineet spots Rajeev’s place empty and wonders where he is at that time of the night.

Rajeev reaches the party and starts to apologize to Neeti for being late by doing sit-ups while holding on to his ears.

Neeti forgives Rajeev after a few sit-ups and warns him not to be late from now onwards.

Meanwhile, Parminder comes down and spots Parineet roaming around the room. She scolds her for disturbing others’ sleep and leaves.

Back at the party, Rajeev kisses Neeti’s forehead at the requests of his friends as his eyes shine with love for her.

The engaged couple starts to dance together during which Neeti tells Rajeev that he is just her best friend’s husband, kind and gentle.

Rajeev asks Neeti to introduce him to them to which Neeti replies smugly as she is already planning the surprise meeting.

On the other hand, Rajeev’s Bhabhi Chandrika calls him after getting to know that he is not in the house from Parineet.

Rajeev tenses upon seeing the call and wonders if Parineet has messed up anything back at home.