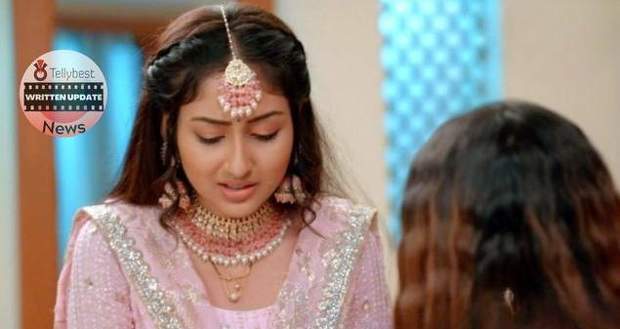 Today's Parineeti 9th September 2022 episode starts with Pari telling Rajeev that marriage is based on love and understanding.

Before Rajeev can reply, Gurinder comes forward and accuses Pari of being stupid and careless.

Gurinder even announces that she always thought Pari is someone who knows how to take care of the family respect.

Further, angry Rajeev informs Pari that he will walk away from this marriage if Pari continues her acting.

Hearing this, Pari looks at Rajeev with fierce eyes and tells him to walk away.

While Pari and Rajeev are arguing, Gurinder gets worried as she thinks Pari will reveal the truth about the property.

In the meantime, Tayaji screams at Pari for ruining his family’s reputation.

Even Parminder announces that Pari was the favorite daughter-in-law of the Bajwa family but now she has lost her reputation.

However, Pari turns towards Tayaji and tells him that she told Rajeev beforehand that she does not want to get married but he refused to listen.

Hearing this, Tayaji looks shocked while Rajeev gets paranoid and orders Pari to keep quiet.

Meanwhile, Gurinder starts accusing Pari of being ungrateful towards her and Rajeev.

Gurinder even reminds Pari about how the previous grooms rejected Pari and walk away from the wedding.

This remark adds fuel to Pari’s rage and she announces that Rajeev married her because of Gurinder’s happiness.

Pari then stops abruptly because she does not want anyone to think low of Gurinder much to Gurinder’s relief.

Further, Pari states that Rajeev never wanted to marry her, so he left Pari at her maternal home after the pagfera ritual.

Pari even adds that Rajeev wanted to enjoy his double wife without Pari’s knowing much to everyone’s shock.

Hearing this, Simmy starts taunting Pari for being a small-minded person as she thinks Pari’s allegations are baseless.

While Pari tells Simmy that Simmy won't understand as she is not married, Rajeev orders the guests to leave.

Later, Rajeev takes Pari’s hand and pushes her away near the entrance to stop Pari from leaking his secret.

While Rajeev is busy urging everyone not to trust Pari, Pari starts thinking about Neeti’s advice of taking a stand for herself and decides to reveal the truth.

With a bold attitude, Pari turns and informs everyone that Rajeev has two names and two wives.

Meanwhile, in the hospital, Neeti starts feeling lonely without Rajeev and decides to call him.

Back in Bajwa’s house, Gurinder tries her best to stop Pari from speaking the truth but Pari ignores her and continues her accusations.

In the meantime, Rajeev gets a call from Neeti much to his irritation.