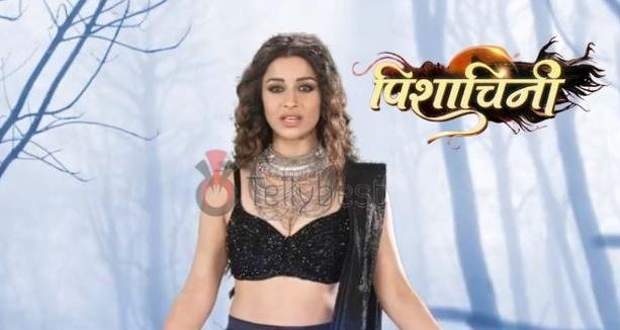 Today's Pishachini 10th August 2022 episode starts with Rocky helping Pavithra with the luggage and entering the house while Rani keeps a close eye on them.

Elsewhere, the Rajput family sits together to have tea and talk about their time separate while Pratik says that he wonders if he wants he did in the past is correct or not.

On the other side of the house, Pavithra talks to Nikita about their childhood together and asks her about the groom.

Nikita points toward her soon-to-be husband but he turns away at the same time making Pavithra think that Nikita is pointing toward Rocky.

She tries to talk to Nikita but Nikita gets distracted and leaves from there.

At the same time, Rani enters the house to find the girl who came with Rocky.

However, the family dog starts barking and running around the whole house which makes Dadaji anxious.

Rani finds Pavithra in her room but gets triggered seeing the frame of Lord Hanuman and extends her nails and hair.

Before her hair can touch Pavithra, Pavithra turns to see nothing.

Pavithra notices the hair and goes after it while Rani finds humor in mocking her since she's a Bhaktkumari (devotee).

Back in the main room, Dadaji keeps telling his family that he senses Pishachini and further states that there isn't even a single picture of God or a temple in the whole mansion.

The remaining family members also get convinced by Dadaji's talks.

At the same time, Pratik is also telling Ankita that he feels guilty for bringing his family and wants to inform them of the truth.

Before Pratik can leave, Rani arrives there and mocks the couple while scaring Pratik into putting the earrings on her.

Elsewhere, Pavithra is looking for Nikita's room when she sees Rocky flirting with a girl and thinks that she has to inform Nikita about her groom being a playboy.

Back in Pratik's room, Pishachini threatens Pratik and Ankita revealing that she has done a mantra on Nikita.

Flashback shows, Rani going near an unconscious Nikita and doing some mantra on a strand of her hair which wraps itself around Nikita's neck and goes invisible.

Back in the present, Rani clicks her fingers, and Nikita suddenly starts suffocating.

Rani again clicks her fingers and the suffocating stops after which Rani tells Pratik and Ankita to do as she says.

Meanwhile, Pavithra tells Nikita about Rocky and promises to even gather evidence.

The next day, Rocky, Sanchit, and Shikha go into the woods while Rani keeps an eye on them.

Rocky keeps praising Pishachini and the things he would get which makes him Rani's target for her to return to Bareli.

Rani gets flattered by Rocky's compliments while he sits taking support of the tree.

© Copyright tellybest.com, 2020, 2021. All Rights Reserved. Unauthorized use and/or duplication of any material from tellybest.com without written permission is strictly prohibited.
Cached Saved on: Friday 30th of September 2022 07:06:24 PMCached Disp on: Saturday 1st of October 2022 04:07:24 PM