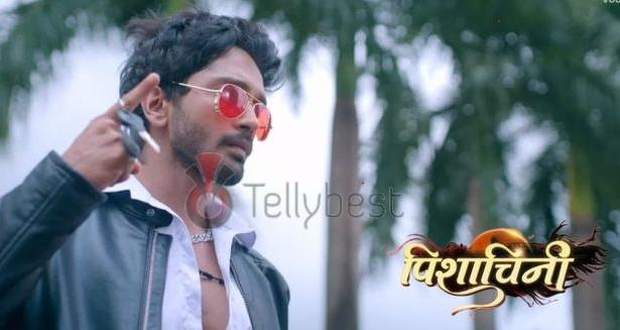 Today's Pishachini 11th August 2022 episode starts with Rocky sitting with the support of a tree while two hands come from behind him and scare him.

Their younger cousin reveals herself and all laugh at Rocky.

Further, she tells Rocky about overhearing the elders talk and Dadaji saying that Pratik is hiding something from them and that he has invited them over here with a lie.

This makes Rocky excited as he states that his assumptions about Pishachini are correct and that they should look for her.

However, the cousins leave there dismissing his rubbish talk.

Just then, Rani laughs melodically and makes Rocky follow him.

However, before he can touch Rani, Pavithra comes there making Rani disappear and climb on the tree.

Further, Pavithra flirts with Rocky while hoping that the camera she has set up catches everything so that she can show it to Nikita and prove that her soon-to-be husband is a player.

However, Pavithra gets lost in their flirting and fixes a dinner date with him while the cousins come back and tell Rocky to return.

Rocky turns back to look at Pavithra which makes his cousins excited for him as he's never done that for any girl before.

Meanwhile, inside the mansion, Ankita is giving Babli and Badi Bhabhi sarees and jewelry to wear for the wedding.

Babli goes to look for a mirror and stumbles into the walk-in closet which makes her excited.

However, Ankita starts panicking and tries to get Babli out of there hurriedly as she keeps looking back at the row of wigs.

At the same time, Rocky is boasting about flirting with the foreigner girl while Pavithra is telling Nikita about the same event.

Nikita gets worried as it's her Sangeet event at night and sees the video but doesn't see anyone due to a leaf covering the camera.

Later, Rani is combing through her magical hair looking at a floating mirror as she recalls the moment with Rocky in the forest.

On the other hand, Pavithra tells Nikita that she will expose that player tonight during the Sangeet ceremony at any cost.

Afterward, Dadaji tells Pratik and Ankita to swear on him and tell him if that Pishachini is still shadowing them or not.

However, Pratik recalls Rani's threats and lies to Dadaji that Pishachini is gone from their lives.

Later during the Sangeet ceremony, Rocky helps Pavithra tie the ropes of her blouse without letting her know that it was him.

Afterward, Nikita dances with her fiance while Pavithra thinks that it is to make her soon-to-be husband jealous.

Pavithra further dances with Rocky while Pishachini sees them from the window and feels enraged.

© Copyright tellybest.com, 2020, 2021. All Rights Reserved. Unauthorized use and/or duplication of any material from tellybest.com without written permission is strictly prohibited.
Cached Saved on: Saturday 1st of October 2022 01:36:39 AM