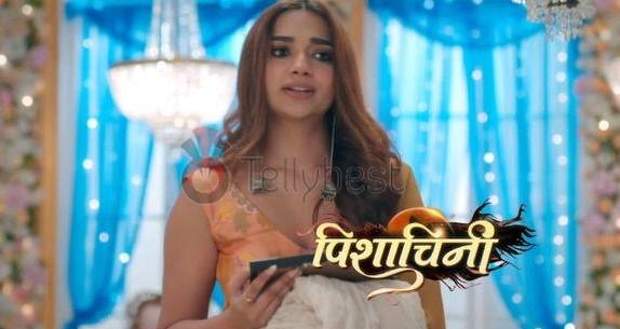 Today's Pishachini 12th August 2022 episode starts with Rocky complimenting Pavithra while she recalls telling it to the person who helped her tie the back of her blouse.

In anger, Pavithra drags Nikita away and creates a scene while degrading Rocky thinking of him as Rohit.

She shouts and says that the marriage will not happen after which Nikita calms her and tells her that the man she is talking about is her cousin Rocky and introduces her to her fiance, Rohit.

Rocky leaves from there looking disappointed while Pavithra goes to Dadaji and apologizes for the drama.

However, Dadaji tells her that he's glad that his granddaughter has such a good friend as Nikita starts the dance party once again.

Further, Rocky acts emotional and hurt in the garden after noticing Pavithra coming his way.

She apologizes to him while Rocky starts his dramatic acting and turns it into romance by saying that his only mistake is that he danced with the girl he likes.

Pavithra stands shocked while Rocky removes his jacket and puts it around her shoulders before leaving to make an impression on her.

Back inside the party, Rani enters disguised as a dancer and mesmerizes everyone with her dance except for Dadaji who sees her face and gets shocked to see Pashichini.

Dadaji wonders why Partik lied to him while Partik and Anjali realize that Dadaji found out about Rani judging by his expression.

Later, Dadaji looks for the dancer girl while Shikha informs him that Rocky went with her to help her as she has gotten a sprain in her ankle.

Meanwhile, Rocky carries Rani in his hands as they both keep flirting and reach his room.

Pavithra gets jealous after seeing them and closes her door angrily.

Rocky makes coffee for the girl while Rani sits on the bed extending her hair and inspecting the things inside.

She concludes that Rocky is a materialistic guy and decides to make him her puppet and use him to go to Bareli.

However, Rani overhears Dadaji's shouts and gets worried.

Dadaji opens the door to Rocky's room and throws the holy water at the girl sitting on the bed.

The girl turns out to be Nikita who states that she was there to look for the family while Rocky makes the excuse that the girl left hearing feeling shy from them.

At the same time, Pishachini glides through the air and reaches the garden while looking over at Rishi's room window.

Dadaji rushes to find Pishachini as the family members manage to convince Dadaji to stay until Nikita's marriage ends.

Just then, Pavithra comes there to return Rocky's jacket and Bindiya tells her about the dancer being a supernatural creature.

Later, Pavithra rushes to her room and searches through her grandfather's diary, and finds a lot of notes about Pishachini.

Pavithra wonders if her past is connected to Pishachini in any way and decides to find out.