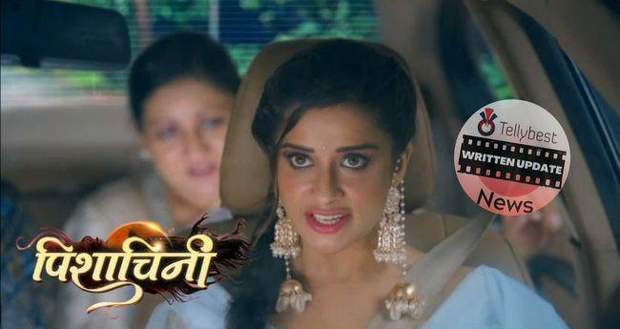 Today's Pishachini 12th September 2022 episode starts with Rani flashing out of the car and appearing in her real form floating in front of the car.

Himani gets startled seeing her while Rani extends her magical hair and lifts the car into the air and crashes it causing an accident.

Back at the Rajput family, Sudhakar scolds Swapna for not checking Himani and Rani's background while Pavithra and Dadaji hope that Himani and her family are alright.

The family members ask him whose accident and Rocky informs everyone that Himani and her parents died in the accident and that Rani is the only survivor.

The Rajput family starts comforting Rani while Rocky blames Pavithra for the deaths stating that she forced them to leave the house causing the accident.

Further, Pavithra feels guilty and cries while telling Dadaji that she doesn't want anyone to blame him like she is being blamed.

However, Dadaji tells her to not blame herself as the only culprit is Rani and that they have to bring Rani's truth out in front of everyone before she turns everyone into Pishach/Pishachini like her.

At the same time, Rani makes up a story in front of the Rajput family and makes them think that Pavithra is the only reason her family is dead.

Swapna tells Rani that she is a part of the family now.

Rani acts insecure and states that maybe Pavithra doesn't like her because she likes Rocky and manipulates the family members.

Swapna gets influenced by Rani's words and says that she's disappointed in Pavithra while blaming her for the accident.

Pavithra has overheard everything and rushes to the balcony while Rocky sees her and goes after her.

Pavithra cries while Rocky comes behind her and starts berating her while blaming her for the negative clouds looming over the family.

Elsewhere, Rani takes a luxurious bath while the whole bathroom gets covered in her long hair.

Swapna comes there just then and knocks on the door while Rani tells her that she'll be out in some time.

Meanwhile, Pavithra tells Rocky that she still thinks Rani is a Pishachini and begs him for a day to prove that Rani is Pishachini.

Pavithra cries that Rani did the same thing 20 years ago and killed her family.

When Rocky doesn't say anything, Pavithra leans into his shoulder.

Rocky clenched his fist restraining himself but is unable to control his emotions any longer and strokes her head to comfort her.

However, Rani has seen them and feels as if she's boiling with anger.

© Copyright tellybest.com, 2020, 2021. All Rights Reserved. Unauthorized use and/or duplication of any material from tellybest.com without written permission is strictly prohibited.
Cached Saved on: Saturday 1st of October 2022 10:42:35 PM