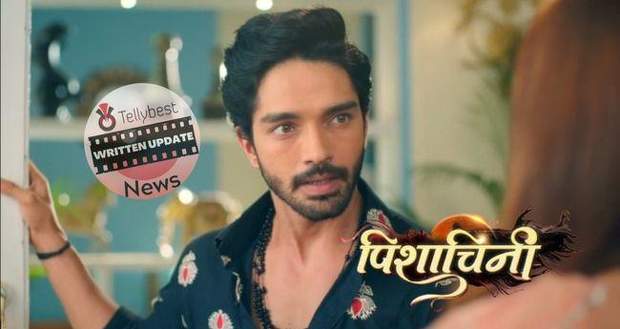 Today's Pishachini 13th September 2022 episode starts with Rani turning to look at the balcony and not seeing anyone there.

Meanwhile, Rocky's mother and Aunt got worried for Rani and open the door to the restroom.

As soon as they open the door, they get heartbroken to see Rani crying in the corner.

Shikha takes Rani to her room while Chachi asks Swapna if she thinks Pavithra is responsible for everything.

At the same time, Rani does her magic and removes the stain fully from Shikha's face which makes her happy but confused at the same time.

Shikha asks her why she removed the whole mark fully and Rani says that she expects her to money all her future orders.

However, Bindiya is passing by that room and gets shocked to hear Rani's laughs.

As she is thinking aboit it, Rani shocks Bindiya by coming in front of her.

On the other hand, Pavithra is praying for a solution to find one of Pishachini's weaknesses when the pages turn to a special page that is glowing.

The next morning, Rocky comes to Rani's room and she acts as if she's just woken up and he tells her that he brought breakfast for her.

Flashback shows Pavithra telling Rocky to feed Rani and make sure that he sees her digest the bites as a Pishachini cannot eat anything.

Back in the present, Rani tells Rocky that she isn't feeling hungry as Pavithra looks at the interaction through the glass window.

Rani recalls how the grim reaper told him that Pishach/Pishachini cannot consume food as food is only for humans.

Rocky tries to feed Rani when suddenly they hear the sound of Dhol.

Rani goes out angrily into the hall followed by Rocky and Pavithra where the family informs them that they have decided to go with how they decided for the marriage which is to be held after three days.

As Rocky starts his body itching with nervousness, he tells the family that they should have asked for Rani's opinion as she is suffering the most right now.

Rani says that she agrees with it as it was her mother's last wish when Bindiya speaks up and asks if Rocky wants to marry Rani or not.

However, the family members silence her once again by saying that Rocky has already given his response in the past.

On the other hand, Rani's skills fully acts as if she's emotional at the mention of her family and rushes away from there without any suspicion.

In the kitchen, Rani throws up the food and turns it into her real form while Pavithra clicks her pictures just then.

© Copyright tellybest.com, 2020, 2021. All Rights Reserved. Unauthorized use and/or duplication of any material from tellybest.com without written permission is strictly prohibited.
Cached Saved on: Sunday 2nd of October 2022 04:17:03 PMCached Disp on: Thursday 6th of October 2022 03:42:44 PM