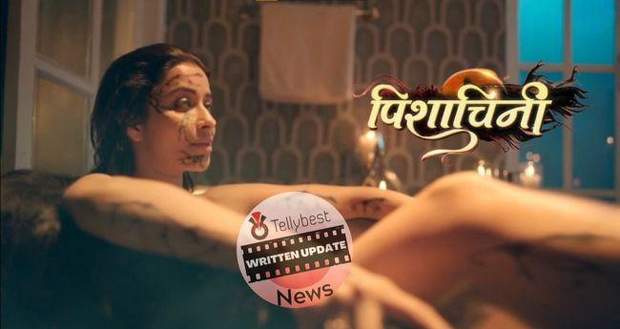 Today's Pishachini 14th September 2022 episode starts with Pavithra mocking Rani and telling her that she didn't have mobile phones and other things to capture her true nature in the past but now they have phones.

Rani smirks and tries to use her magic on Pavithra but gets shocked when Pavithra is unfazed.

However, Rani starts using brute force and tries to snatch the phone from Pavithra but Pavithra pushes him away.

Rani further picks up many utensils from the kitchen using her hair and throws them toward Pavithra stating that she is after Rocky only because she wants to see Pavithra suffer.

Rani and Pavithra both get into a physical fight when Pavithra's special mark makes Rani fly into the window.

The Rajput family takes notice of the sounds coming from the kitchen and gets shocked to see it in ruins.

At the same time, Rani creeps her head around the corner and makes a lie that a giant bird came into the kitchen while she slipped.

Pavithra agrees and tells the family that she has clicked pictures.

However, the family thinks that she is joking since there is no one in the picture.

The family leaves while Rani mocks Pavithra and tells her that she can't be visible in the pictures since she's not a human.

Meanwhile, Dadaji looks into the Panditji's pouch and finds a key.

At the same time, Pavithra tells Rocky that she tried to click Rani's picture but he tells her that he knows she attacked Rani.

Flashback shows Rani manipulating Rocky and making him think that Pavithra attacked her in the kitchen.

Pavithra requests Rocky to believe her and not marry Rani at any cost.

However, Rocky misinterprets it and tells Pavithra that he will not get married if she tells him that she does not want him to get married.

Pavithra looks away from him as she tells him that she wants to focus only on defeating Rani and getting her revenge.

Rani appears there just then and mocks Pavithra as she reveals that she is planning to make her into a Pishachini too.

However, Pavithra's mind gets stuck on Rani's words saying that her fake brother (Himani's brother) also died by jumping into the well.

Pavithra goes to the abandoned mansion and looks for a dead body while the corpse is lying on a tree.

Before Pavithra's gaze lands on it, Pratik and his wife come there and tell her that they have come back to help her as they know that Pishachini has come back to Bareli.

© Copyright tellybest.com, 2020, 2021. All Rights Reserved. Unauthorized use and/or duplication of any material from tellybest.com without written permission is strictly prohibited.
Cached Saved on: Sunday 2nd of October 2022 05:03:39 AMCached Disp on: Thursday 6th of October 2022 03:53:09 PM