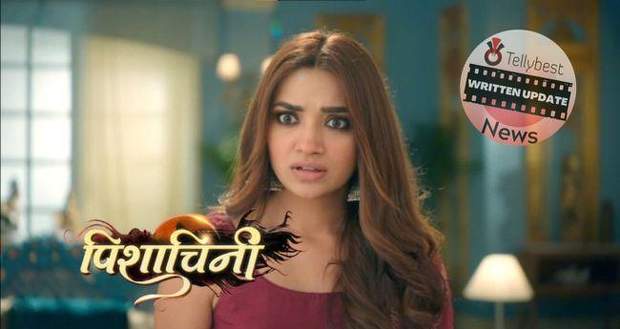 Pavithra asks them if they have any plan to stop Raji and they tell her that they cannot defeat Rani but know all of her tricks.

Meanwhile, at the Ful Mansion, the family is doing the arrangements for Pratik and Amrita's welcome while Shikha speaks rudely to them and leaves while admiring her beauty in the camera.

Back at the abandoned mansion, Pratik tells Pavithra that Rani should not know they are together when Pavithra gets a call from Nikita.

Pratik and Amrita get into their Pishach/Pishachini form but turn back into humans once they realize that Pavithra cannot talk to Nikita due to a network problem.

Further, Pavithra tells Pratik and Amrita that Dadaji also knows Rani's truth and is totally fine from the paralyzation.

Later, Pratik sends this information to Rani who appears in front of Dadaji as he is finding the lock for the key he has.

On the other side, a servant accidentally spills oil in front of Pavithra and she gets emotional recalling her date with Rocky and how he lifted her to walk over the puddle of water.

Rocky comes there just then and again recreates the scene by holding Pavithra in his hands and crossing the spilled oil.

Inside the Ful mansion, the servants get confused to see Dadaji sitting in the wheelchair which is moving with inhumane speed.

Sanchit is giving a lecture to Rocky about forgetting Pavithra and focusing on Rani while Bindiya sees the wheelchair and tells her cousins and goes to check followed by Rocky.

Meanwhile, Rani mocks Dadaji and tells him that she knows he can walk which pushes him to run away from her.

However, Rani catches up to him and demands what is in his hands.

When she finds nothing, Rani gets angry and traps him in a frame along with other pictures of the family members.

Just then, Rani hears footsteps and hides under the blankets while Rocky and Bindiya enter the room.

Rocky teases Bindiya that she has lost her eyesight and is about to wake up Dadaji (Rani under the blanket) when Swapna calls both of them outside.

Further, Rani wonders what Dadaji was holding while Bindiya finds the key and gets curious.

On the other hand, the Rajput family welcomes Pratik and Amrita while they worry as they can only come inside in their Pishach/Pishachini form.

At the same time, Pavithra is on a call with Nikita and gets shocked when she hears that Pratik and Amrita are dead.

Suddenly, the lights go off and Pavithra gets shocked to see Pratik, Amrita, and Rani entering the house while they are glowing neon green.

The lights come back and the family goes inside while Rani appears in front of Pavithra and mocks her saying that she has proved her point by turning Pratik and Amrita into Pishach/Pishachini and states that her third target is Rocky.

© Copyright tellybest.com, 2020, 2021. All Rights Reserved. Unauthorized use and/or duplication of any material from tellybest.com without written permission is strictly prohibited.
Cached Saved on: Saturday 1st of October 2022 10:25:38 PMCached Disp on: Monday 3rd of October 2022 08:18:01 PM