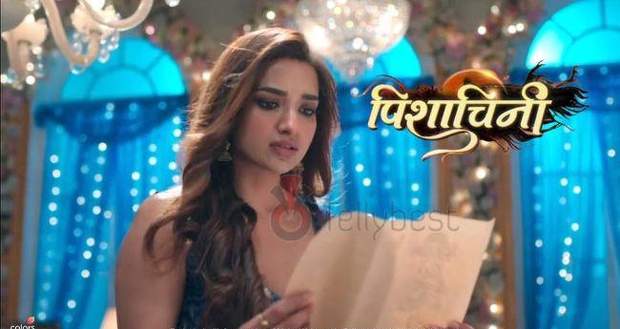 Today's Pishachini 16th August 2022 episode starts with Dadaji trying to warn Pavithra by advising her to leave after the wedding as they will also leave as soon as the wedding is done.

However, Pavithra is adamant and asks Dadaji if he is going to leave Pratik and Ankita with the Pishachini.

Dadaji retorts that Pratik is the one who freed Pishachini twenty years ago which caused the death of her family.

Pavithra still remains adamant that they should not leave them in danger as it might be a trap of Pishachini.

Back inside the house, Rani is admiring Rocky's sleeping body while asking him if he will take her to Bareli.

Just then, Sanchit and Bindiya barge inside Rocky's room and wake him up as Rani has teleported on top of the cupboard and is peeking into their conversation.

On the other hand, Dadaji finally decides to help Pavithra and tells her that they have to find the wooden box that they used to capture Rani twenty years ago without letting anyone know about it.

Later, Dadaji goes to the storeroom to look for the wooden box when he finds a frame of Pratik, Ankita, Niki, and two other kids which confuses him.

However, he suddenly ducks and hides as Rani enters the storage room and makes cat noises in a way to mock him.

Elsewhere, Pavithra goes to Rocky and extends a hand of friendship to him with the intention to get his help in finding the wooden box.

Rocky thinks that his charms are working on her and asks her for her name but Pavithra makes the excuse that he should find it out by himself.

Further, Pavithra gives Rocky the description of the wooden box while he jokes that he will ask the Pishachini for a sports bike once he catches her.

On the other hand, Rani catches Dadaji when he lets his guard down and attacks him.

Nikita comes to take Pavithra and Rocky to the function while she calls Pavithra by her nickname Piku.

Rocky gets amused by it and starts annoying Pavithra as they both get dragged away by Nikita.

At the same time, Rani teleports inside the house and looks around while Dadaji is seen standing outside the window of the second floor while barely managing to hold onto the ledges to not fall onto the ground.

Later, Rocky keeps trying to flirt with Pavithra while Shikha's hair gets flown away by the wind, and the huge mark on her cheek is exposed.

Nikita mistakes it as a Mehendi stain and points it out gaining the attention of everyone.

Shikha feels humiliated and cries while her cousins cheer her up and convince her to sit for Mehendi once again.

Away from everyone, Pratik is seen removing his prosthetic left leg and taking the support of a walking stick.

At the same time, Ankita is seen doing her make-up as half of her face is like an old lady along with wearing a wig as she is bald.

Back at the Mehendi function, Rani is disguised as a Mehendi artist and gets shocked as she sees the scar resembling Hanuman Tilak on Pavithra's hand.

© Copyright tellybest.com, 2020, 2021. All Rights Reserved. Unauthorized use and/or duplication of any material from tellybest.com without written permission is strictly prohibited.
Cached Saved on: Friday 30th of September 2022 06:58:38 PMCached Disp on: Saturday 1st of October 2022 12:35:09 AM