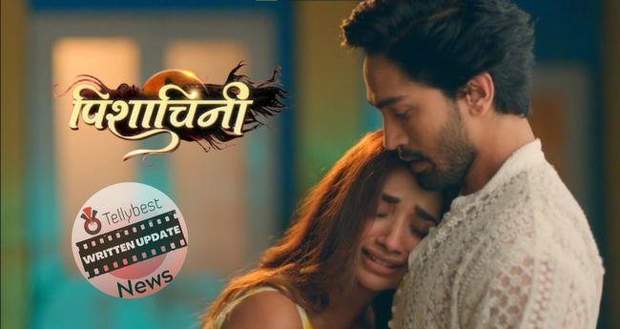 Today's Pishachini 16th September 2022 episode starts with Rani getting ready for the Sangeet while Pratik and Amrita tell her that all the preparations to end Pavithra are done.

Rani says she will dance to her heart's content to celebrate as it's her wedding.

Meanwhile, the ghost tree in the abandoned mansion starts glowing green and Rocky takes notice of it from his window.

On the other hand, Pavithra gets worried about Dadaji as she recalls telling Amrita and Pratik about him and rushes to check on him.

At the same time, the rest of the family is busy welcoming the guests.

Rocky goes to the abandoned mansion to inquire and is about to return when he hears the sound of a digital watch.

However, as he turns around to look, he sees Mandy with the watch.

Back inside the Ful mansion, Pavithra is stopped from entering Dadaji's room by Amrita and Pratik who state that he is resting while Swapna tells Pavithra to go get ready for the Sangeet ceremony.

Rocky asks Mandy about the glow from the tree and Mandy just says that the tree did it on its own.

Later, the Sangeet ceremony starts and Rocky-Rani are told to give a dance performance while everyone cheers for them.

Pavithra looks at the performance with a heavy heart unable to bring a smile to her face while Rocky feels guilty for dancing with Rani.

Pavithra tries to leave from there but is stopped by Chachi as Pavithra hides her eyes filled with tears.

Pratik and Amrita come downstairs and lie that Dadaji is still sleeping while Pavithra takes this chance to go upstairs and check on Dadaji.

Rani rushes to Dadaji's room and upturns the comforter to reveal a dummy in place of Dadaji which worries her.

On the other hand, Rocky recalls seeing the watch that Mandy was wearing in a picture in which Himani's brother was wearing it.

Rocky thinks Pavithra was right about Rani not being a human.

Meanwhile, Pavithra throws away the dummy and looks around the room for some clues to find Dadaji.

Just then, she sees Dadaji blinking in the frame and concludes that Rani trapped him in the frame.

Further, she rushes out and bumps into Rocky who holds her seeing the tears coming out of her eyes.

He asks her what happened while she takes him by the arm and drags him to Dadaji's room saying that they cannot trust anyone.

Further, Pavithra tells Rocky that rani trapped Dadaji in the frame and requests Dadaji to blink.

Suddenly, Dadaji appears to be coming from the other side in his wheelchair which shocks Rocky.

© Copyright tellybest.com, 2020, 2021. All Rights Reserved. Unauthorized use and/or duplication of any material from tellybest.com without written permission is strictly prohibited.
Cached Saved on: Sunday 2nd of October 2022 03:45:21 AMCached Disp on: Wednesday 5th of October 2022 05:53:53 PM