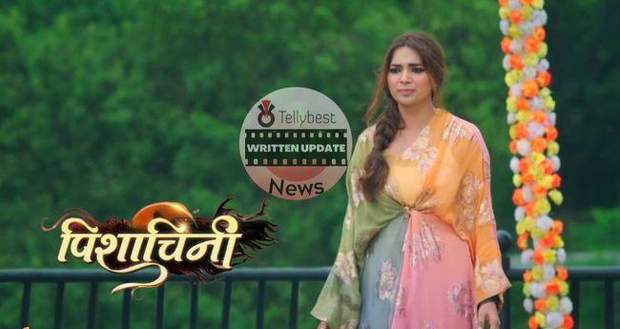 Today's Pishachini 17th August 2022 episode starts with Pavithra telling Rocky to look for the wooden box in the main basement while she looks for it in Pratik'a room.

Rocky teases Pavithra by calling her Piku while she also makes fun of him by calling him Lakshit.

Elsewhere, Dadaji sees a balcony and decides to reach the balcony.

Meanwhile, Pavithra goes to Pratik's room while Pratik and Ankita are in the walk-in closet.

Ankita is talking about how the deal with Pishachini has taken more from them than it has given them.

Pavithra hears their conversation and is about to walk in there when suddenly Rocky comes there and drags her away.

Rocky tells her that he saved her from being caught and they both hide after seeing Ankita coming their way.

Ankita shouts if someone is there and closes the door when she doesn't get any response.

Further, Ankita goes to the walk-in closet where Pratik is standing with the wooden box.

Ankita warns him to not go against Rani as she has already found the person who will take her and the wooden box to Bareli.

However, Pratik gets emotional and tells her that he does not want to lose any of his family members at Pishachini's hands.

Dadaji overhears their conversation from the window where he is stuck and gets emotional when he hears that Pishachini took away Pratik and Anjali's kids which he saw in the frame earlier.

Ankita tells Pratik to follow Pishachini's orders if he doesn't want to lose Nikita too but Pratik refuses.

Pratik cries as he slaps himself for going against his family twenty years ago and tells Ankita that he won't let Rani go to Bareli.

Pratik hides the wooden box in the chandelier that is being lifted into the air after which Nikita shows him her Mehendi and makes him emotional once again.

Later, all the ladies are getting emotional as they admire Nikita in the bridal wear while Pavithra thinks about the wooden box and signals Rocky to meet her on the other side of the room.

The ladies take Nikita to the mandap while Pavithra gets a call from her aunt and she stays back to attend the call.

Pavithra's aunt tells her to come back soon from the next's days Delhi to London flight.

Pavithra prays to lord Hanuman when suddenly her phone falls and the camera application open accidently.

Again, the wooden box goes missing once she reaches downstairs and sees the chandelier empty.

Elsewhere, Dadaji is seen running through the jungle with the wooden box in his hands.

Rocky goes inside the house to look for Pavithra when someone touches his shoulder from behind and roams their hand on his chest.

Thinking that it is Pavithra, Rocky gets giddy but feels shocked when she comes from the other direction and tells him to look for Dadaji.

Later, Pavithra is on her phone while Pishachini is seen flying towards her from behind with her long nails out to hurt Pavithra.