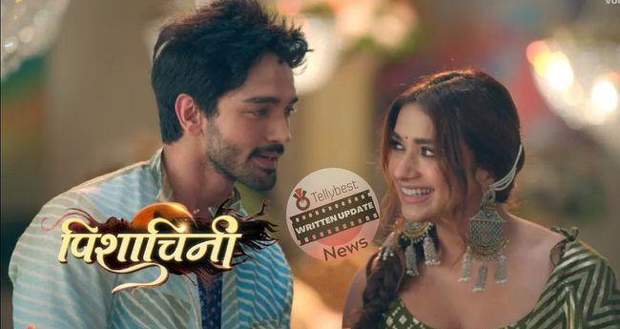 Today's Pishachini 18th August 2022 episode starts with Dadaji covering the wooden box with a special powder given to him by Panditji which will alert Pishachini's arrival.

As soon as the power touches the wooden box, Pishachini gets alerts and teleports herself to the jungle area.

Elsewhere, Pavithra and the whole Rajput family have started looking for Dadaji now.

Back in the jungle, Dadaji runs towards the fence and throws the wooden box but Pishachini appears suddenly and saves it from crossing the fence.

Further, Pishachini acts innocent and talks sweetly to Dadaji telling him that she is just like his daughter and that he should take her back to Bareli.

However, Dadaji tells her that he will lock her in the wooden box once again and will put her six feet under the ground just like 20 years before.

Rani mocks Dadaji and gives him the wooden box as he keeps chanting Hanuman Chalisa.

On the other hand, Nikita's wedding proceeds without the elders as they keep looking for Dadaji.

Pishachini laughs at Dadaji's attempts and further does a mantra on him leading him immobilized on the ground.

Further, Dadaji somehow manages to walk and reach the wedding where he falls unconscious.

As Nikita's wedding completes, Pavithra notices Dadaji and runs to him while the other family members also run to his side.

Back in the jungle, Rani flaunts the wooden box in her hands as she walks toward the mansion.

Inside the mansion, the doctor informs the family that Dadaji suffered a paralytic stroke which has made him paralyzed for some time.

Further, the family makes immediate arrangements to return to Bareli while Rocky tries to converse with Pavithra.

However, Pavithra tells him goodbye coldly after which the Rajput family members bis her goodbye inviting her to stay over at their home sometime.

Later, Pavithra packs her bags as she recalls Dadaji trying to tell her something and wonders if he had taken the wooden box and tried to trap Pishachini in it.

Further, she looks for Rani's dupatta that she had left at the mansion when she came there disguised as a dancer.

She finds the dupatta and runs after it reaching the jungle.

Pavithra recalls reading that Pishachini's clothes can never be destroyed and that she comes running when someone tries to light her clothes on fire.

Afterward, Pavithra lights a matchstick and throws it on the dupatta waiting for Pishachini to come and attack her.

However, she gets shocked to see the dupatta get lit on fire which makes her sure that Pishachini has left from there.

Pavithra wonders if Dadaji trapped Pishachini or if she has left to go to Bareli somehow.

On the other hand, Pratik and Amrita also wonder who was weak enough for Pishachini to trap.

Meanwhile, in the Van, Shikha is seen holding onto the wooden box while hiding it from the family.

Flashback shows, Rani, running into Shikha and manipulating her into agreeing to a deal with her in exchange for helping Shikha get everything she wants, including a beautiful face and a better husband than Nikita.

Shikha agrees and makes the deal with Pishachini while the present shows Rani sitting on the roof of the Van as it is on its way to Bareli.