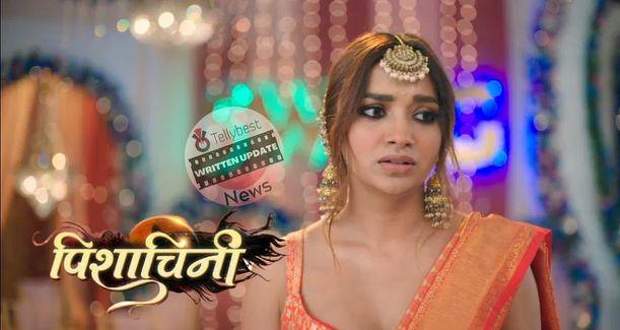 The family goes inside as Rocky talks with Dadaji and feels emotional.

However, Shikha stays back holding the wooden box as she recalls a memory where Dadaji is telling them to stay away from the old haveli as Pishachini used to reside there.

Back in the present, Shikha stands with the wooden box in her hand as she says that she did the mistake of bringing the wooden box to Bareli but won't let Pishachini enter their Ful haveli.

Meanwhile in Chile, Pavithra goes to Pratik and Amrita's room to bid them goodbye but they both don't open the door and bid her goodbye from the window.

In reality, Pratik is still only one-legged while Amrita's whole face has turned old which is the work of Rani's tricks.

On the other hand in Bareli, Shikha goes inside the old haveli and leaves the wooden box there stating that Rani won't be able to enter the Ful haveli until someone invites her in.

As Shikha leaves, Pishachini appears on the tree and laughs saying that she will soon get inside the Ful haveli too, and gets emotional seeing her old haveli.

Further, Pishachini talks to the statue of Mandy the frog and brings it to life with her magic saying that now it's time for him to get to work.

At the same time, the Rajputs talk about the possibility of Pishachini being the reason for Dadaji's sudden stroke while Rocky's parents refuse to believe or accept it.

On the other hand, Pavithra is sitting in the car as she talks about Rocky and blabbers on as the other passengers listen to her.

Rocky is also missing Pavithra as she talks about her beauty which makes Sanchit and Bindiya tease him.

Pavithra gets a call from her Maasi and she gets hesitant to answer it while Rocky gets a call and he leaves the room telling his cousins that it is Miss London (Pavithra) calling him.

Later, Rani hovers outside Shikha's room and tries to manipulate her into inviting her into the Ful haveli.

However, Shikha refuses as she cries that she has made a mistake by bringing her to Bareli.

Just then, Rani sees Rocky on a call with Pavithra and goes to admire him while she thinks that she will meet him soon.

Pavithra is asking Rocky something when she notices Pishachini flying away but doesn't recognize her.

She questions Rocky and he shows her the surroundings to confirm that there is no one beside him.

Pavithra notices the night blooming jasmine flowers scattered which confirms her suspicions that Pishachini is in Bareli.