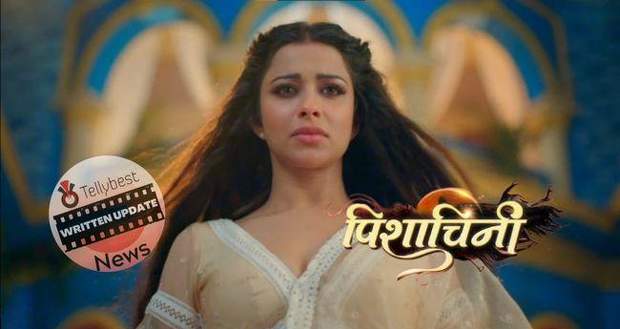 Today's Pishachini 19th September 2022 episode starts with Pavithra getting shocked to see Dadaji in the wheelchair and looking back at Rocky who is standing silently.

Pavithra turns to Rocky and tries to convince him but he just looks at her with disdain.

On the other hand, Rani dances and enjoys the night while Shikha joins her with confidence as she doesn't have the mark on her face anymore.

Swapna gets happy to see her daughter dancing with joy after a long time while Bindiya wonders how the mark got removed.

However, her mother tells Bindiya that Shikha must have put on makeup.

A flashback shows Pratik and Amrita blackmailing Dadaji to come out of the frame by making him think that they are going to turn Shikha into Pishachini like them.

Once Dadaji is out of the frame, the three mock him and Shikha reveals that she is the one who brought the wooden holy box to Bareli from Chile.

The three tell Dadaji that they are going to turn Dadaji into a Pishach but Dadaji says that it's not possible since he didn't take any favor from them.

However, Pratik reveals that Dadaji took their help to get out of the frame and turns him into a Pishach.

Back in the present, Rocky leaves the room and gets confronted by Rani as to why he left the party.

He tells Rani about Pavithra thinking that Rani is a Pishachini and Rani starts acting hysterical which makes Rocky feel guilty for her.

On the other hand, Pavithra gets shocked as Dadaji reveals to her that he has turned into a Pishach and tells her to join them too.

Pavithra says that she will never turn into a Pishachini and leaves from there.

Further, Pavithra comes to Rocky and Rani and tells them that she is sure Rani is a Pishachini.

Rocky says that she has made false allegations in the past too which led to dire consequences.

Pavithra says that she has proof and tries to touch Rani with the hand that has the holy mark.

Rocky stops her while Rani thinks that she got saved from being exposed.

Pavithra looks at Rocky with pleading eyes while he tells her to not do her drama anymore and return to London after which he leaves with Rani.

Pavithra goes to the temple and prays while Rani puts a spell in a glass of juice and gives the glass to Rocky to drink.