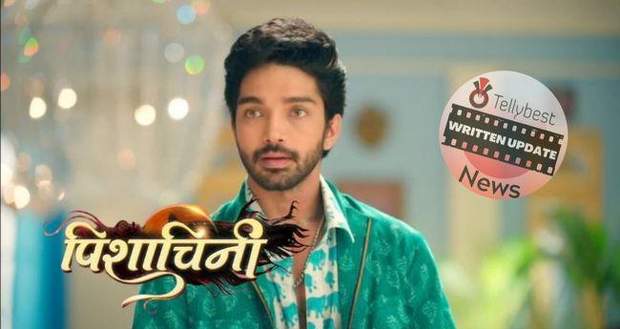 Today's Pishachini 1st September 2022 episode starts with Sudhakar saying that he had gotten the date for marriage for a week later but he refused.

However, Rocky recalls all the harsh words said to him by Pavithra and states that they have enough time to prepare for the wedding.

The family members start teasing Rocky while wondering who will save them from Pishachini now.

At the same time, Pavithra comes there and confronts Rani about finding her brother's wallet in the abandoned haveli near the well.

Rani keeps making up plausible excuses and makes Sudha agree with her as the whole family looks on.

Afterward, Sudhakar and other family members start convincing Pavithra to stay back but Rocky says that she has no one of hers there.

Pavithra agrees and leaves when the handkerchief around her plan becomes loose and falls on a diya.

Pavithra goes back to take it and gets shocked when she sees that it is not damaged at all.

Rani comes and takes away the handkerchief while Pavithra realizes that Rani is Pishachini.

Back inside the haveli, Himani and her parents plan to distract Rani while Himani can sneak out and save her brother, Vikas.

At the same time, Sanchit and Bindiya try to talk to Rocky but he just gets angry and tells them to let him get ready in peace for the Janmashtami celebration.

Meanwhile, Rani paces in her room wondering what to do as the whole Rajput family will find out about herself if she touches the aarti plate in front of them.

Laughing maniacally, Rani takes a wand and burns herself while Mandy comes there and starts crying saying that she will soon die.

However, Rani laughs at him and tells him that she cannot be burned but is doing this so that the family members think that she has a fever and don't tell her to attend the pooja.

Mandy warns Rani about Himani planning to free Vikas while Rani just laughs stating that Himani will disappear before that.

Later, Rani starts her drama and tells Rocky to stand close to her and hold her hand but Pavithra comes there and stops him.

Rani looks at Pavithra longingly while Pavithra thinks that she has to save the Rajput family anyhow.