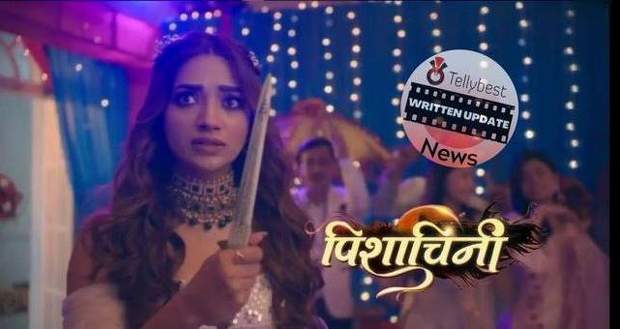 Today's Pishachini 20th September 2022 episode starts with Rani seeing Rocky gulp down the juice Bindiya comes rushing towards them and accidentally hits the glass of juice away before Rocky can drink the whole thing.

Rani smiles as Rocky has forgotten about Pavithra and dances on the stage with the rest of the family.

Rani goes and dances with Pratik and Amrita while Manohar's wife sees them interacting and finds it unusual.

On the other hand, Pavithra begs in front of the temple to help her and cries as a huge gust of wind blows.

Meanwhile downstairs, the family gets worried at the heavy winds but Rocky says that the winds cannot stop Rocky and Rani's growing love for each other and starts dancing with Rani in front of the stage.

Inside Pavithra's room, the heavy winds start scattering all the diary pages around the room which lend in the center and catch fire getting Pavithra's attention.

Pavithra looks on as the fire becomes bigger and she can see Lord Hanuman in it.

Afterward, the fire shows the key that Bindiya had found before vanishing.

Pavithra looks back at the temple and sees the sketch of the key along with the sentence stating that this key will be the way to Pishachini's end.

The mark on Pavithra's hand starts glowing and leads her to Bindiya's room where the table starts shaking as the key attaches itself to Pavithra's hand.

Pavithra takes the key and goes downstairs while Bindiya comes out of the bathroom and gets confused to see the things scattered around the table.

Further, Pavithra aligns the key with the mark on her hand and the key suddenly turns into a dagger.

Pavithra recalls how Pishachini killed her family as she goes to the center of the stage and stabs Rani in front of everyone.

The Rajput family gets shocked and rushes to help her but Pavithra stops them saying that she will expose Rani's truth today.

Pavithra states that Rani is a Pishachini and that blood would ooze out of her would had she been human.

The family members look at Pavithra as if she's gone mad and rush to take Rani away from her while Pavithra gets shocked to see the pool of blood where Rani had been lying.

As soon as the ambulance leaves, Pavithra gets shocked to see Rani, Dadaji, Pratik, and Amrita flying downwards towards her.

All the Pishach/Pishachini start laughing while Pavithra asks how Rani is here when she was just put into the ambulance.

Rani laughs as she tells Pavithra that she will always be one step ahead of her.