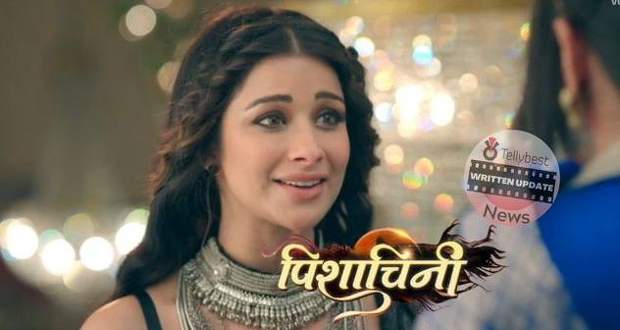 Today's Pishachini 22nd August 2022 episode starts with Shikha having a nightmare that she let Rani inside the Ful Mansion after which Rani dug her nails into her heart and killed her.

On the other hand, Bindiya is praising Rocky for guarding Dadaji and staying the night with him.

Further, she shows Rocky pictures of him and Pavithra and teases him.

Elsewhere, Dadaji tries to write Pavithra's name on a piece of paper when Sudhakar comes there and mistakes it as Dadaji asking about Pratik.

Back in Rocky's room, he wonders about Pavithra and thinks about the time they bid each other goodbye.

Back in Chile, Pratik and Ankita have turned into old people as they regret doing the deal with Pishachini and paying a hefty price for it.

On the other hand in Bareli, Rocky is seen getting ready and telling Sanchit to take care of Dadaji for the night as he has to go out for some important work.

However, Sanchit is busy on a call and doesn't hear what Rocky said to him.

Elsewhere, Sudhakar and his wife talk about the proposal coming for Sanchit that they are expecting in a few days.

Meanwhile, Rani comes to the window outside Dadaji's room and taunts him while Dadaji wonders how she reached Bareli from Chile.

Rani acts as her mischievous self and tells Dadaji to come to talk to her as she holds him by her hair and teasingly talks to him by declaring that she'll enter the mansion anyhow.

Sudhakar is about to go to Dadaji's room to check on him but his wife stops him saying that they should truth Rocky.

Just as Rani is about to suffocate Dadaji, he manages to swing the chandelier which makes a noise alerting everyone.

The family rushes to Dadaji's room and gets shocked seeing Dadaji on the ground while Shikha figures out that it was Pishachini's doing by seeing the open window.

Sudhakar gets angry as it was Rocky's responsibility to take care of Dadaji and shouts for him.

At the same time, Rocky is seen on road to Delhi with the same pot that Pavithra had knocked over with her car when they had met for the first time.

As Rocky reaches the Delhi airport and leaves a voicemail for Pavithra, he hears her voice saying that she missed her flight.

Back in Bareli, Shikha is blaming herself for everything when she hears a frog's voice and gets shocked to see Mandy.

Suddenly, Mandy transforms himself into human form which frightens Shikha.

Just then, Rani also teleports herself there and introduces Mandy to Shikha stating that she keeps an eye on everyone through him.