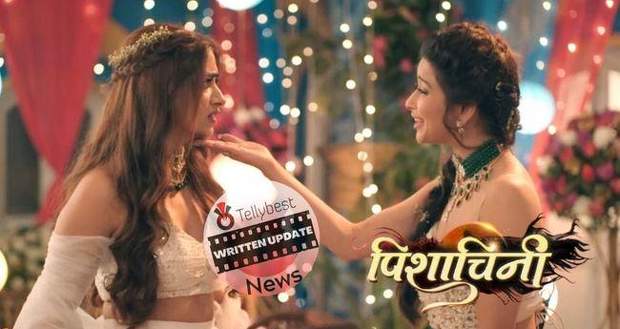 Today's Pishachini 22nd September 2022 episode starts with Rani appearing on Pavithra's bed and mocking her by saying that she is the bride but Pavithra's Bidai is happening.

However, Pavithra talks back, saying it is not her who will leave the house.

Rani and Pavithra keep bickering with each other while Amrita and Pratik go to Rocky that tells him that they have a gift for him.

Rocky feels uneasy about their friendly behavior while they give him honeymoon tickets to Switzerland and distract him.

However, Rocky notices the ghost tree glowing green and goes toward the window while Pratik and Amrita think that Mandy might be getting rid of the dead body.

On the other hand, Mandy is feeding the dead body of the girl who had taken Rani's identity to the ghost tree.

Rocky shows the glowing tree to Pratik and Amrita but they both lie that they cannot see the green hue emitting from the tree.

Dadaji comes there too and also lies that he also cannot see anything unusual.

Rocky recalls seeing the same green hue in the past and wonders if what Pavithra was saying was true or not.

Elsewhere, Rani plays hide and seek with Pavithra by teleporting to a different place in the room and then hits her from behind with a shovel.

Back in Rocky's room, Pratik and Amrita make Rocky drink the Pishach juice and make him forget everything about Pavithra and the green hue.

Rocky gets excited about his Haldi ceremony and marriage with Rani and goes to sleep for some rest while Pratik and Amrita laugh thinking that Rocky will be under the influence till the morning.

Dadaji asks what they will do about Pavithra while Amrita informs him that Rani has already taken care of her.

At the same time, Rani takes Pavithra inside the well and puts her unconscious body there while thinking that she will get married to Rocky by the time Pavithra can get out of the well.

The next morning, Rocky and Rani's Haldi ceremony is going on while Pavithra wakes up and shouts for help.

Rocky hears Pavithra's voice and feels something but falls back into Rani's magic and talks to the family enthusiastically about the marriage.

On the other hand, Pavithra finds rocks with people's names and dates on it and realizes that they are the names of the people Rani is killed over the past 200 years.

Just then, Mandy comes there and shows Pavithra the last slate while showing her a flashback.

The flashback shows Rani asking the devil how she can become Maha Pishachini and him telling her that she will have to marry into the family of the person who killed her and bear a child that will be half human and half Pishach to become the Maha Pishachini.

Pavithra sees the name on the last slate and realizes that Rocky's ancestor was one who had killed Rani and this is the reason why Rani wants to marry Rocky.