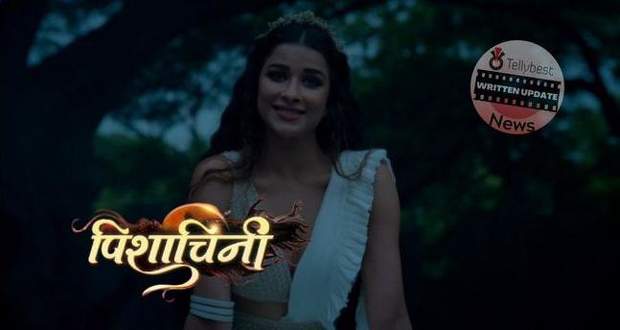 Today's Pishachini 23rd August 2022 episode starts with Rocky hearing a girl say that she missed her flight on call and going to her thinking that its Pavithra.

Meanwhile, Rani throws Shikha inside the dried-up well and goes after her which frightens Shikha even more.

Rani tells Shikha that she just wants to talk to her and tells her that she wants to help her only and takes her towards the magic mirror.

Shikha is scared to look into the mirror while Rani touches the surface of the mirror with a smirk on her face.

Rani twists Shikha's face to make her see the reflection in the mirror and Shikha gets surprised to see that the mark on her face is gone.

Rani knows that she has influenced Shikha and tells her that she can remove her mark for real while Shikha begs Rani to help Dadaji's health condition to improve.

However, Rani circles Shikha and tells her that she has to enter the house to cure Dadaji.

Meanwhile, Mindy goes to see his reflection in the mirror and gets disappointed seeing that it's of a frog only.

On the other hand, Rocky is disappointed at the airport as he cannot find Pavithra anywhere and assumes that she left for London.

The next morning, as Rocky is entering the house while talking to the plant, he bumps into Pavithra and drops the plant in surprise.

They both bend to pick up the plant and Rocky imagines a romantic moment between them.

In reality, Pavithra teases him by scolding him the same way he scolded her when they first met.

Later, Sudhakar and his wife greet Pavithra as she tells them that she apologizes if her visit is troubling them as she decided to stay back in India at the last moment.

Further, Bindiya takes Pavithra to show her the guest room while Sudhakar mocks Rocky and informs him about Dadaji falling from the bed and injuring himself.

Rocky rushes to Dadaji's room and gets emotional while Sudhakar comes there and scolds him.

Sanchit comes there just then and reveals to Sudhakar that it was he who didn't come into the room on time.

However, Sudhakar scolds Rocky even more and tells Sanchit to not save Rocky.

Meanwhile, Pavithra listens to the voicemail left for her by Rocky and feels guilty.

She goes to Dadaji's room and the elders leave seeing her while Rocky also leaves to hide his upsetness from everyone else.

Back at the abandoned haveli, Rani tells Mandy that she hates everyone from the Rajput family and that she is going to ice her burning heart by taking her revenge on them.

Later, Pavithra goes to Rocky and tries to talk to him knowing that he is upset but he brushes it off and keeps up his lively jolly attitude.

© Copyright tellybest.com, 2020, 2021. All Rights Reserved. Unauthorized use and/or duplication of any material from tellybest.com without written permission is strictly prohibited.
Cached Saved on: Monday 3rd of October 2022 02:43:59 AMCached Disp on: Wednesday 5th of October 2022 05:03:51 PM