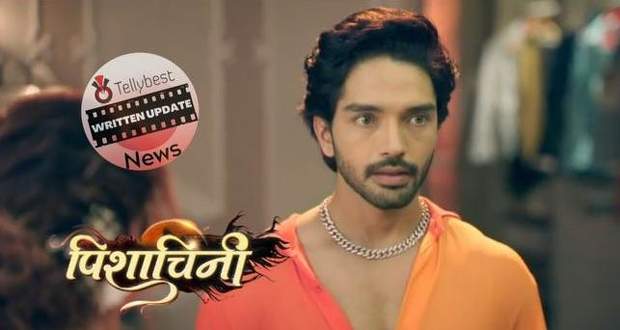 Today's Pishachini 23rd September 2022 episode starts with Pavithra realizing that Rani is after the Rajput family since they are the descendants of Raghuvir Rajput, the person who killed Rani when she was human, and because it is the only way she can become Maha Pishachini.

Pavithra starts thinking that she has to stop the marriage at any cost when she sees the water coming into the well and gets worried that she will be submerged in water if she doesn't get out.

Back at the Ful mansion, Sanchit tells Rocky that he still has time to change his decision and hints about Pavithra.

However, being under the influence of Rani's magic, Rocky says that he's not making any mistake when Bindiya/Vidhya comes there and tells them that she thinks there is some truth in Pavithra's words.

Sanchit asks her what she's talking about and Vidhya reveals how she saw the tattoo on Rani's hand during the attack and how it was not there afterward.

Rocky's parents come there and he tells them about Vidhya's words while making her feel embarrassed.

Swapna and Sudhakar scold Vidhya and tell her and Sanchit to get out of the room so that Rocky can get ready for the wedding.

Later, Rocky gets ready standing in front of the mirror when the magic wears off for some time and he gets worried feeling something tug at his heart as Pavithra keeps crying out for help.

Elsewhere, Vidhya is talking to Dadaji stating that she knows something is wrong with Rani and that Pavithra was right.

Vidhya gets on eye level with Dadaji and begs him to give her some sign but he leaves from there in his wheelchair without saying anything.

Just then, Vidhya's eye lands on the Panditji's pouch in the garbage and wonders who put it there.

Later in the night, the wedding starts as Rocky and Rani are brought to the mandap and sat together for the rituals while the family members look on in happiness.

Back at the well, Pavithra tries to keep her head above the water with a heavy struggle while Vidhya goes to Sanchit and gives him the pouch she found in the garbage.

Sanchit informs her that Panditji gave Dadaji the pouch to keep the family safe from Pishachini which makes Vidhya relieved stating that this pouch can help them.

Rani notices the pouch in Vidhya's hand and tries to tell Pratik and Amrita about it but fails as the Panditji starts reciting Mantras.

Shikha goes to do the Gathbandhan while Rani takes this opportunity to go tell her to take care of Vidhya.

Elsewhere, Pavithra's leg gets entangled with a branch and she is unable to swim up to the surface and get oxygen.

The Pheras start while Shikha finds Vidhya and twists her hands to try and get the pouch out of her hands.

However, in the struggle, some of the holy water drops on Rocky, and Rani's magic wears off.