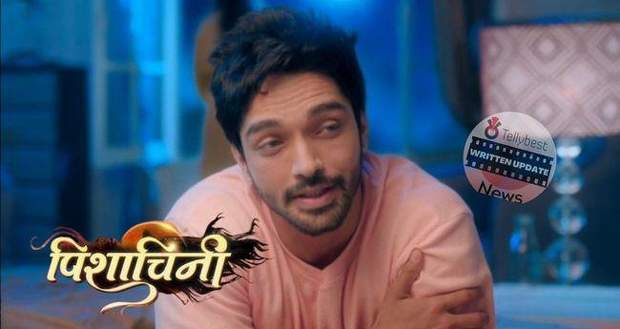 Today's Pishachini 24th August 2022 episode starts with Pavithra sitting behind Rocky on his bike and stopping him as they reach the abandoned haveli.

Meanwhile, Rani is swinging on the swing inside the water well.

Pavithra asks Rishi about the abandoned haveli and he tells her how they were going to build their home there but due to many mishaps, they left the place as it is.

Pavithra goes inside and walks towards the well while Rocky tells her how Dadaji is wary of the place and used to tell them that this is Pishachini's place.

Pavithra gets curious and looks inside the well asking Rocky why the well is dark as a moonless night.

Rocky tells her that no one knows that mystery and takes her out of there while Pishachini gets amused hearing their conversation.

Rani gets out of the well and gets curious about seeing Pavithra as she says that Pavithra is also there to become an immortal Pishachini like her.

Later, Suman gets a call from Sudha who tells her that they are coming today only to have a meeting about the alliance between Sanchit and their daughter.

Hearing the news, Manohar, Sudhakar, and the rest of the family get happy.

On the other hand, Pishachini is seen holding Sudha's son with her hair over the well and Sudha begging her to let her son go.

Pishachini drops her son inside the well and tells her that her son will be alive until she keeps following her orders.

Sudha and her family get frightened and nod their heads as Rani looks at them and smiles innocently.

On the other hand. Rocky takes Pavithra to his favorite hangout place in Bareli.

However, Pavithra stops as a muddle is preventing her from crossing the path while Rocky takes her in his hands and crosses the paths.

Back at the Ful mansion, Shikha gets worried looking at the front door as she recalls Rani telling her that she will come to the Ful mansion the next day.

Just then, the doorbell rings and Shikha's aunt goes to open it while Shikha rushes to stop her but fails her.

Meanwhile, Pavithra sits with Rocky and asks him why came to the Delhi airport.

Rocky makes up a story and keeps on blabbering while Pavithra gives him a look telling him that he sounds dumb.

At last, Rocky tells her that he had come to meet her and getting shy, tells her to not think anything else as he just wanted to bid her goodbye.

On the other hand, Shikha and her aunt see no one outside the front door and are about to close it when Suman calls out to Shikha and tells her to take the milk from outside.

Shikha takes the container inside and gets shocked when Mandy suddenly comes out of the container and transforms into his human form to inform her that Rani will be there in one hour.

Back at the hangout spot, Rocky thinks that Pavithra is about to confess to him and turns to look away but gets shocked when she says that she is there for Pishachini.

Pavithra tells Rocky that she suspects Pishachini has come after them from Chile to Bareli but Rocky doesn't believe it and thinks that she's joking.